Reishi Mushroom For Hair Loss: The Problem With This DHT Blocker

A deep dive into the evidence: reishi mushroom for hair loss

Reishi mushroom – a kidney-shaped fungi – is known in health circles for its immune-enhancing properties. More recently, researchers have found that reishi mushroom can help lower levels of dihydrotestosterone (DHT) – the hormone implicated in pattern hair loss.

This has led people to wonder: is reishi mushroom nature’s finasteride? Can this mushroom really regrow hair? Is it safe? And if yes, how much should I use to maximize the effects?

So, does that mean that reishi mushroom is entirely useless? Not necessarily. In this article, we’ll dive into the evidence for (and against) reishi mushroom’s use as a hair loss treatment. We’ll showcase ways to make this extract more effective. And finally, we’ll reveal possible alternatives for those looking for natural treatments that are cheaper, have higher gradients of evidence, and are potentially more effective.

What is reishi mushroom?

Reishi, also known as Lingzhi (which translates to “herb of spiritual potency and immortality”), is a mushroom revered in herbal medicine. It is believed to possess a myriad of beneficial properties: immunomodulatory, insulin-sensitizing, and even gut-supporting. 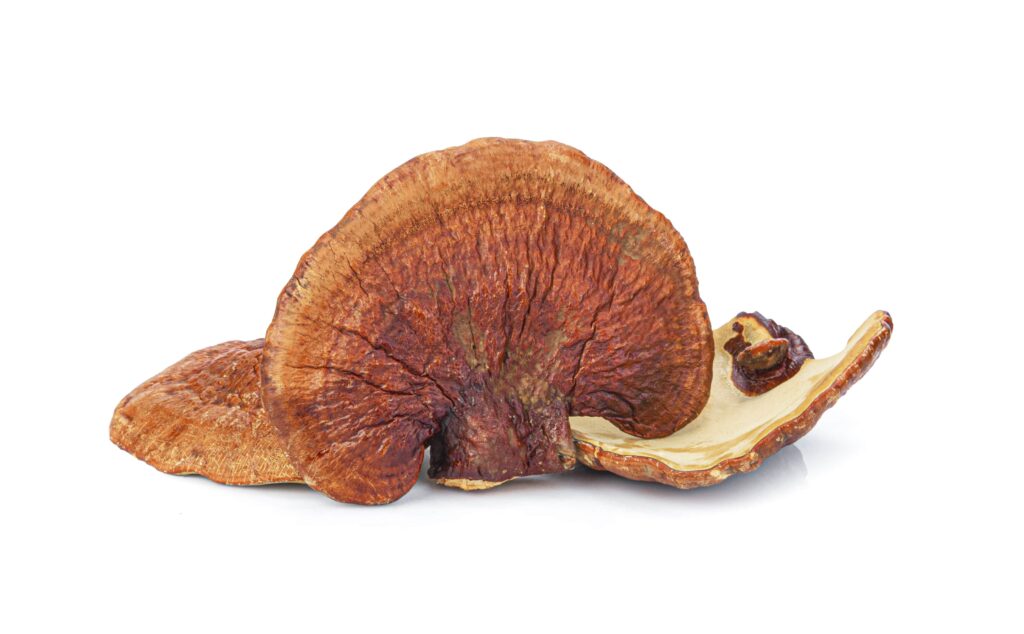 Recently, studies have shown that reishi mushroom extract is also a powerful DHT blocker. Dihydrotestosterone, or DHT, is a byproduct of testosterone. DHT is also the main hormone implicated in the world’s most common hair loss disorder: pattern hair loss, also known as androgenic alopecia (AGA). It goes without saying that the higher your levels of scalp DHT, the more likely you are to experience AGA (pattern baldness).

Given reishi mushroom’s newly discovered DHT-reducing abilities, this has left a lot of people wondering whether this natural extract might also be an effective hair loss treatment… or maybe even an alternative to finasteride (a hair loss drug that also reduces DHT levels).

So, does reishi mushroom extract have the potential to fight pattern hair loss? Well, that depends on a few key things:

As we’ll soon see, the “power” of this fungi may reside more so in marketing efforts than in actual evidence… and that its use as a DHT reducer in pattern hair loss might be a bit premature.

That’s not to say it won’t have any effect, but rather, that there are probably better options – both natural and conventional – that are cheaper, more effective, and better supported by the literature.

Can reishi mushroom help us regrow our hair?

1. How much DHT can reishi mushroom reduce?

This is a tough question to answer, mainly because there’s limited research on reishi mushroom and its ability to reduce DHT. But there is at least one study showing that reishi mushroom might help lower DHT levels, and better than other mushroom varieties.

In 2005, an investigation team wanted to uncover which mushroom species had the “best” DHT-reducing capabilities (1). So they set up a two-part experiment.

First, the team tested 19 mushroom species for their ability to reduce 5-alpha reductase – the enzyme that converts testosterone into DHT. The team turned these 19 mushroom species into alcohol-based extracts using methanol and ethanol. Then, they prepared liver and prostate tissues of mice inside 19 petri dishes, exposed these petri dishes to the mushroom extracts, and recorded any changes to 5-alpha reductase activity.

The findings? Of the 19 mushroom extracts, reishi mushroom – also known as Ganoderma lucidum – outperformed them all.

See this graph from the study. Keep in mind: the more inhibition of 5-alpha reductase, the lower the DHT levels. 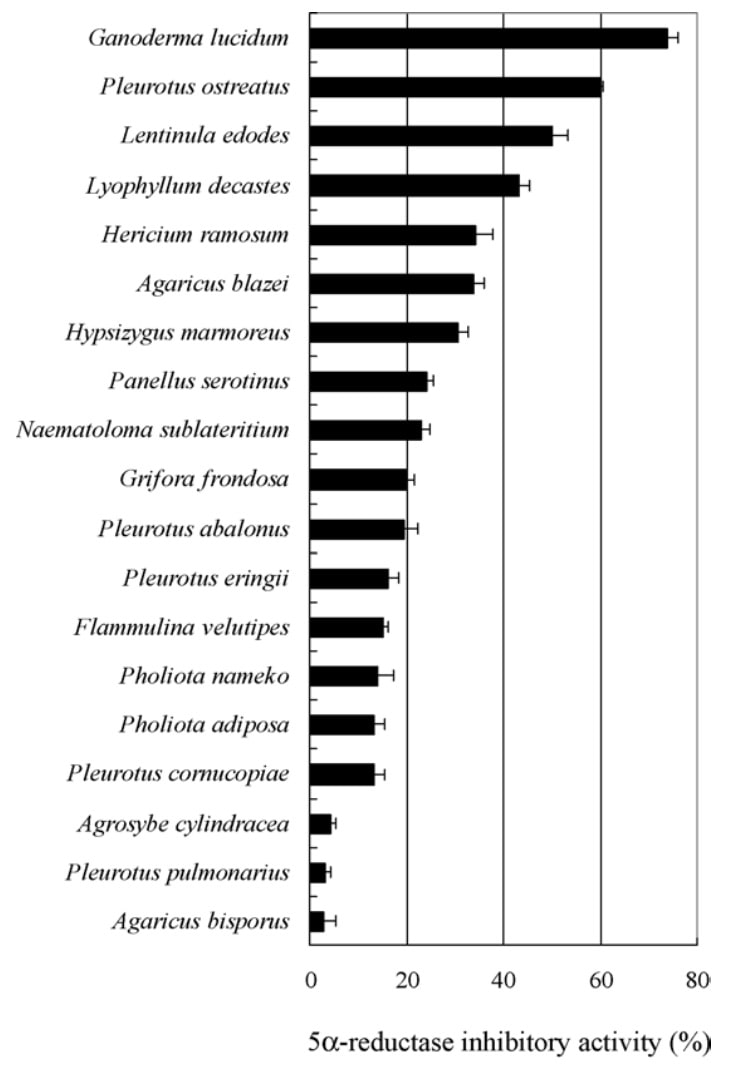 Specifically, ethanol-extracted reishi mushroom inhibited 5-alpha reductase levels by ~75%. This magnitude of inhibition rivals the hair loss drug finasteride – which can reduce 5-alpha reductase by 60-90% (depending on the dose and the tissue). This is why people claim that reishi mushroom is sort of like “nature’s finasteride” (in a moment, we’ll get to why that’s not true).

Next, the investigation team sought to determine if reishi mushroom extract had an effect on the size of prostates in mice. For background, benign prostate hyperplasia (i.e., an enlarged prostate) shares a lot of overlap with male pattern hair loss. Both conditions are causally linked to higher DHT levels, and both conditions are treated with the same drug: finasteride. There also seems to be a correlation between prostate weight and DHT. Specifically, the more DHT in the prostate, the bigger the prostate – and vice versa.

The results were impressive (again). Reishi mushroom extract helped to significantly lower the weight of the prostates. But interestingly, the lower dose – 1.5mg/kg – was most effective.

But can we apply these results to hair loss sufferers? Not necessarily, and for three reasons:

Beyond the problems listed above, there’s also something else that might limit reishi mushroom’s effectiveness as a hair loss treatment: its active compounds (i.e., the ones responsible for lowering DHT) have really short half-lives. This means that the mushroom’s DHT-reducing effects – even if they are substantial – are probably short-lived.

Studies have found that the major anti-androgen compounds of reishi mushroom are a group of fatty molecules unique to reishi, called ganoderic acids (3). These triterpenoid compounds do two things: 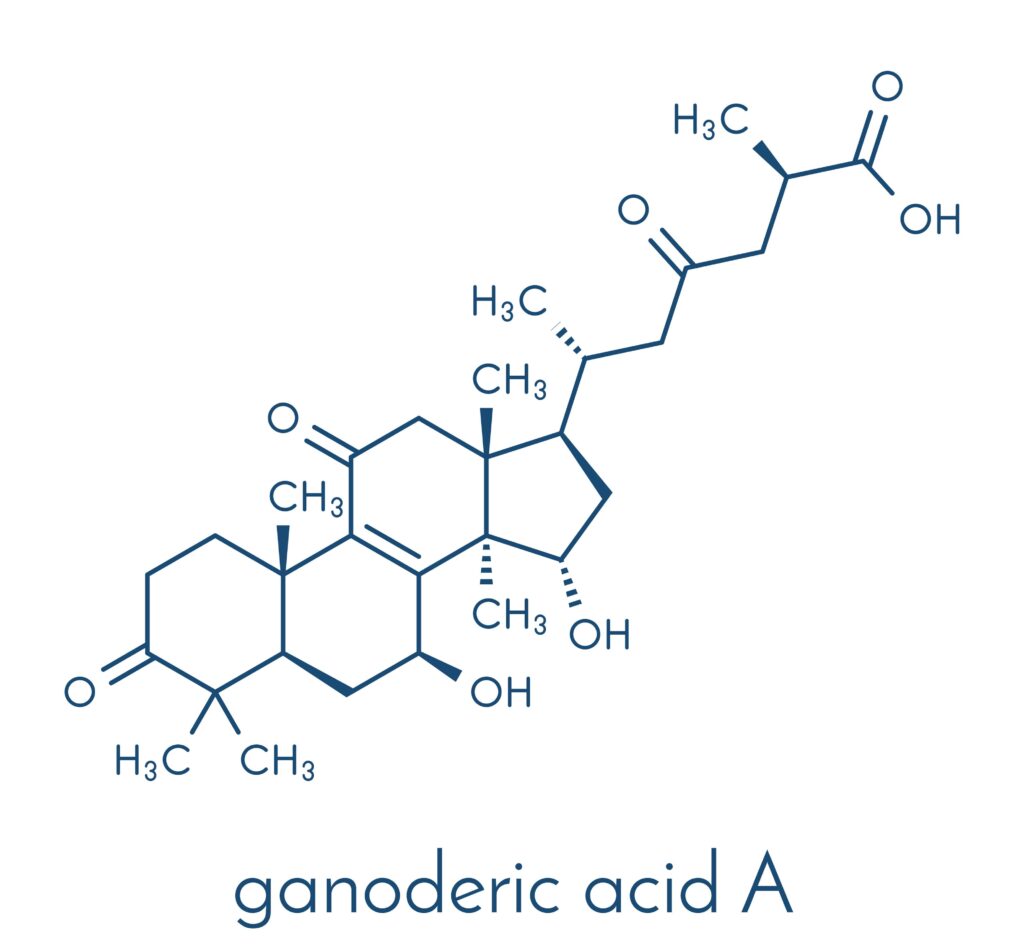 But, this is where things get complicated. In order for a substance to improve pattern hair loss, it needs to not only reduce DHT levels high enough in scalp tissues, but it also has to do so for a sustained period of time.

Much like other botanical DHT-blockers, ganoderic acids in reishi are metabolized very quickly. In fact, their half-life is only 40 minutes in humans (4). After being absorbed via the digestive tract, these compounds are then brought through to the blood to the liver, where they are then quickly eliminated by the body.

This poses an issue for treating conditions like pattern hair loss, mostly because we need DHT to be suppressed in the scalp for significant periods of time. This allows the hair follicle to maintain hair growth and initiate new growth phases. And unfortunately, periods of intermittent androgen reduction don’t really pave the way for new growth.

Consequently, we really can’t expect reishi mushroom’s effects to be on par with something like oral finasteride or dutasteride – two synthetic 5a-reductase inhibitors with much longer half-lives. Unlike reishi, these compounds reduce DHT for significant periods of time, allowing the hair follicle to resume its normal growth.

This brings us to our last question…

Unfortunately, we don’t know. Moreover, with the limitations of the research outlined above – as well as the lacking financial incentives for pharmaceutical companies to do research for non-patentable botanical extracts – we don’t expect a lot more research here to accumulate over the next decade.

Based on the evidence so far, we don’t believe that reishi mushroom extract is anywhere near as powerful at regrowing hair as most marketers suggest. And if you’re searching for botanical DHT reducers with better clinical evidence, it’s probably best to just try something like saw palmetto.

However, that’s not to say that reishi mushroom is completely useless. And with the right delivery vehicle, there’s a good chance that we can not only improve the absorption of this extract, but also improve its sustained release (and therefore its effectiveness).

One way to do this? To try topical (rather than oral) delivery.

Knowing what we know about reishi mushroom’s metabolism when used orally, could topical application allow the active, DHT-reducing ganoderic acids to accumulate at higher levels, and for longer periods of time?

Additionally, it seems that the ganoderic acids in reishi are good candidates for topical use. The skin’s protective barrier, under most conditions, usually only allows molecules smaller than 500 daltons to penetrate the skin (5). Ganoderic acids have molecular weights of around 440 daltons, meaning they can penetrate the skin barrier and potentially accumulate in places like the sebaceous gland, dermal papilla, and skin cells – all places where DHT is produced.

However, there’s no way to confirm this as of yet. As such, our recommendation (as of right now) stands: the best way to use reishi mushroom is to apply it topically.

Currently, there are no topical products that are specifically targeted towards men with AGA. But, that doesn’t mean there aren’t any products available on the market; they just require a little more digging to find.

So, what is the best product for using reishi mushroom topically (from a non-sponsored perspective)?

This oil, while technically designed for oral use, might be a good option. It’s a supercritical carbon dioxide extract of reishi, standardized to at least 30% triterpenoid content – the class of lipid molecules that ganoderic acids fall into. This means that the product is guaranteed to contain a high quantity of the active DHT-blocking compounds.

Again, we’re not affiliated with the above company. We haven’t tried their products, nor do we think reishi mushroom extract alone will be enough to dramatically improve hair loss outcomes. Rather, we’re just trying to find you a reishi mushroom topical that “checks most of the boxes” as a potential intervention for pattern hair loss.

The downside is that these oils are very expensive. At a size of just 15mL, the price per mL of product is almost $2. And when you begin to look into hair loss topicals containing better-studied botanical extracts (like saw palmetto), the price per mL seems incredibly steep.

As such, using reishi in this manner is probably not cost-effective relative to the benefits we may (or may not) experience subsequent to using it.

So, until a more cost-effective product emerges, we’d suggest first pursuing other topicals (or interventions).

As a hair loss treatment, reishi mushroom is more rooted in marketing hype than it is scientific evidence. While its active ingredients can reduce 5-alpha reductase activity and suppress the growth of prostates in mice, it’s unclear if these results translate to humans, and if the findings can be applied to men and women with androgen-driven pattern hair loss.

Moreover, the half-lives of reishi mushroom extract – in humans – is just 40 minutes. This rapid elimination means that if the extract does appreciably reduce DHT, it might not do so for a long enough period to have a big effect on our hair.

One way to bypass elimination problems might be to apply reishi mushroom topically. Currently, this approach is expensive – and we wouldn’t recommend it as a standalone treatment.

This isn’t to say that reishi mushroom extract is useless. Rather, we just feel there might be better options out there.

Have any questions about reishi mushroom or other natural DHT blockers? Ask below!

Rob English is a researcher, medical editor, and the founder of perfecthairhealth.com. He acts as a peer reviewer for scholarly journals and has published four peer-reviewed papers on androgenic alopecia. He writes regularly about the science behind hair loss (and hair growth). Feel free to browse his long-form articles and publications throughout this site.

9 thoughts on “Reishi Mushroom For Hair Loss: The Problem With This DHT Blocker”