Note: this is part three of a four-part series — a master guide to reducing DHT levels for hair loss. Missed the earlier articles? Read part one here, and part two here.

In the first article, we uncovered what DHT is, how it’s made, the DHT-hair loss connection, and how we can reduce DHT (and maybe fight hair loss) by using four major levers.

Then we dove into all the mechanisms by which we can decrease DHT by using the first and second lever: reducing free testosterone and inhibiting 5-alpha reductase.

By the end of the second article, we summarized the mechanisms (but not all the drugs, foods, supplements, and treatments) targeting those first two levers: 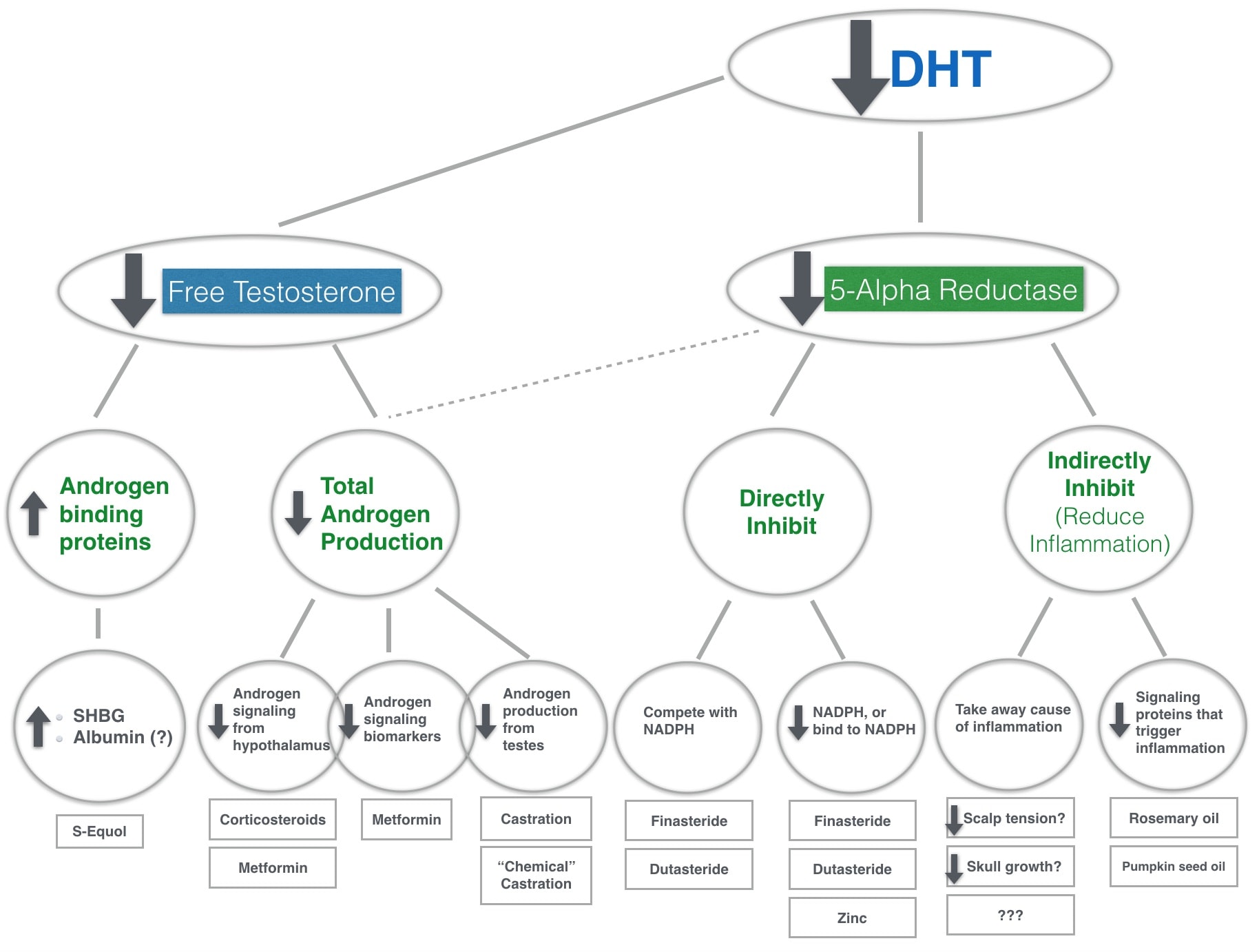 But we still have two DHT-fighting levers left.

This article is the third installment to our DHT-reducing mechanism series. We’ll uncover the third major DHT-reducing pathway – and its known mechanisms – in hopes of reducing DHT to slow, stop, or reverse pattern hair loss.

It all builds into our Master Flowchart: A Guide To All Major DHT Reducing Mechanisms To Fight Against Hair Loss.

What we’re covering now: decreasing DHT by reducing androgen receptors. And the research here is pretty exciting (at least to me).

What Are Androgen Receptors?

Remember: DHT forms when free testosterone interacts with the enzyme type II 5-alpha reductase and converts that free testosterone into DHT. Then that DHT binds to a cell’s androgen receptor, where it influences that cell (and tissue). In the case of pattern hair loss, the kind of DHT people want to reduce is scalp tissue DHT.

How Can We Decrease Androgen Receptors?

There are at least three ways to decrease influence receptors…

Let’s dive into all three. We’ll give a few examples pertaining to each pillar, but this article is by no means an exhaustive list of strategies.

We’ve actually covered this method before – albeit for reducing DHT via free testosterone. And to reiterate: this is a bad idea.

For instance, one way of blocking our body’s ability to produce androgens (and thereby reducing androgen receptor expression) is castration. Another way is to take drugs that change the brain signaling pathways in our hypothalamus so that our bodies convince themselves they need to produce less testosterone to thrive.

Yes, blocking total androgen production significantly decreases androgen receptor activity (likely because there are fewer total androgens available). But doing so comes attaches to serious side effects. And the costs of these side effects far outweigh any benefit to DHT reduction and hair health.

The consequences of this kind of DHT-reducing approach? Low/no libido, depression, sexual dysfunction, the list goes on. So when it comes to safely decreasing androgen receptors, please consider all other options aside from reducing total testosterone production.

In any case, here’s what this looks like in a flowchart: 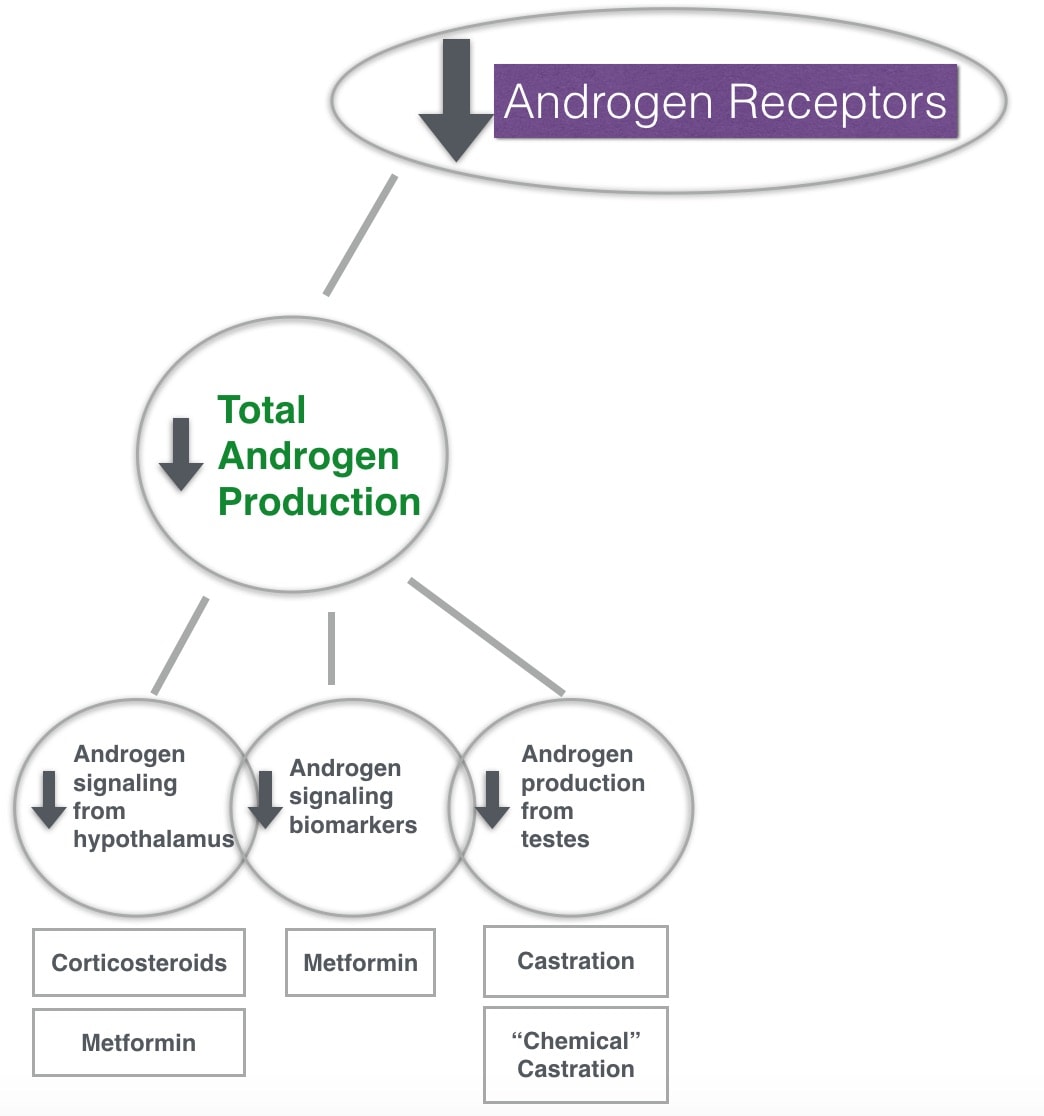 And this is where it gets interesting.

Why is this interesting? Well, an enlarged prostate and men’s balding scalps have a lot in common.

In addition, high DHT levels are associated with both balding scalp regions and an enlarged prostate.

But even more interesting? Hypoxia (lower oxygen) is associated with both prostate cancer and regions of the scalp which are balding.

What does all this mean? We can probably reduce DHT levels by decreasing androgen receptor expression. And how can we do that? By increasing oxygen tissue levels.

If We Increase Scalp Tissue Oxygen, Can We Reverse Hair Loss?

The evidence on oxygen therapies, DHT levels, and hair growth in humans is essentially non-existent. So, we don’t know.

Anecdotally, I’ve spoken with two people who tried hyperbaric oxygen therapy and said that it regrew their bald vertexes over a period of four months. And there’s also a patent on injectable ozone for hair loss sufferers, with cited case studies.

With that said, there’s not enough evidence to say that increasing oxygen is a viable option for 1) reducing androgen receptors, 2) reducing DHT levels, or 3) regrowing hair. There are anecdotes, but no hard data.

Another challenge with oxygen: delivery. Just because we inhale pure oxygen doesn’t mean we actually raise tissue oxygen levels. This is probably why future hair loss therapies using oxygen will come in the form of injections rather than hyperbaric chambers – if at all.

But the bottom line: if we increase tissue oxygen levels, my bet is that this will 1) decrease androgen receptor activity and 2) encourage hair regrowth.

So let’s summarize our mechanisms (so far) for decreasing androgen receptors: 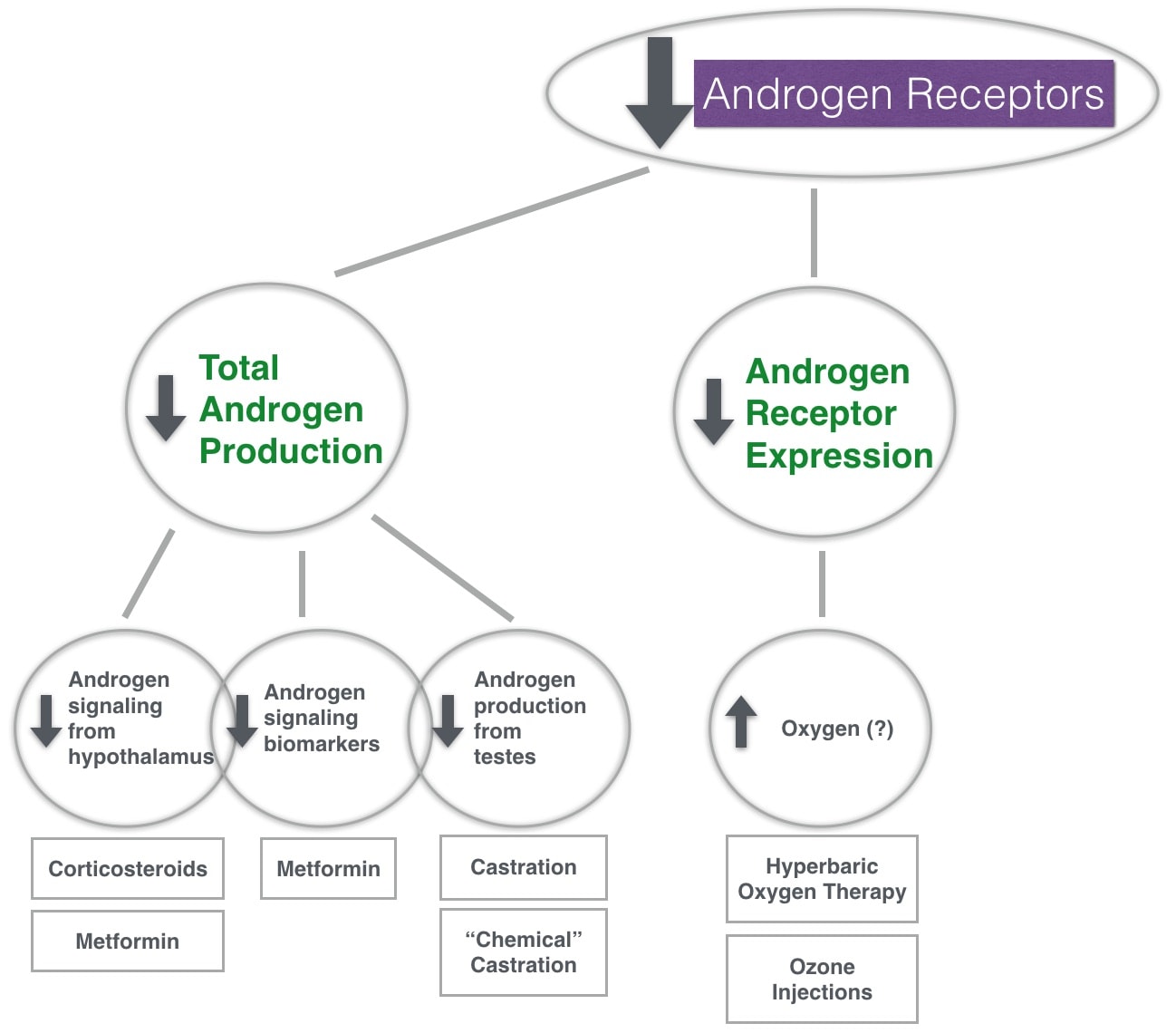 This brings us to our last mechanism to reducing androgen receptors: blocking them. And if you’ve tried many hair loss drugs or keep up with hair loss research, there’s a good chance you know what’s coming.

What does it mean to block androgen receptors?

That’s how androgen receptor blockers reduce DHT: the AR blockers bind to a cell’s androgen receptors and prevent DHT from binding to that same cell. In effect, that DHT can no longer influence that cell’s function.

Spironolactone reduces DHT by blocking androgen receptors, and doctors often prescribe this drug in oral form for women suffering from female pattern hair loss or even hirsutism – unwanted body and facial hair growth. This is because increased DHT is associated with hair loss in the scalp, but ironically, hair growth in the body and face.

Spironolactone is a powerful anti-androgen. In fact, most men are advised against taking it orally as a hair loss treatment. Why? It can be feminizing. In fact, oral spironolactone is the same drug some men use to transition genders and become female.

However, spironolactone also comes in topical form – so we can concentrate its anti-androgen receptor effects to our scalps and minimize the risk of feminization.

The side effects of non-steroidal androgen receptor blockers aren’t fully understood, so unfortunately I can’t say much. What I will say: when it comes to any anti-androgen – do your research, understand the risks, and exercise caution.

Now let’s add all of this to a flowchart: 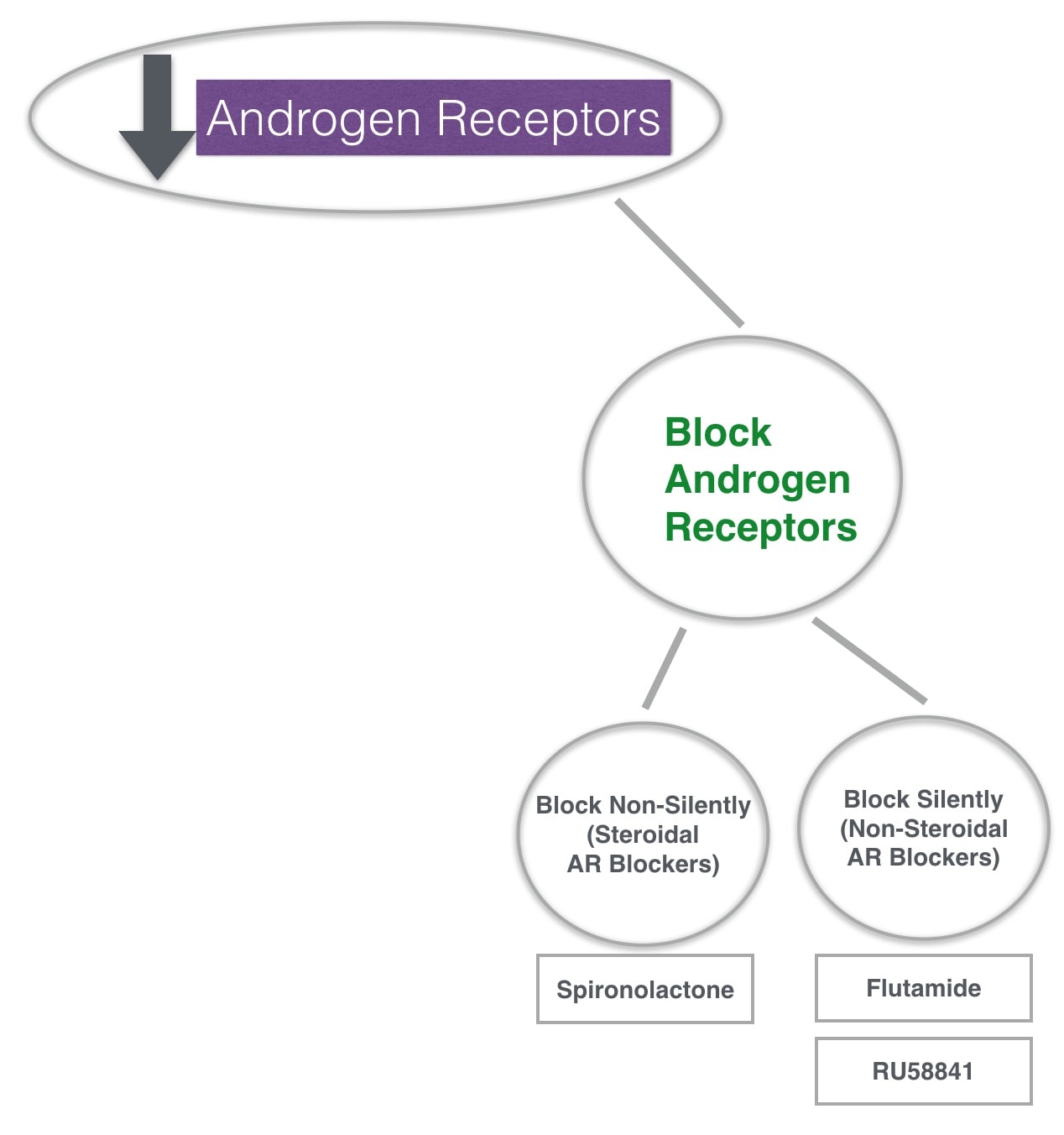 When it comes to reducing DHT by decreasing androgen receptors, there are three major ways we can go about doing this:

Here’s a summary of the major mechanisms behind each way: 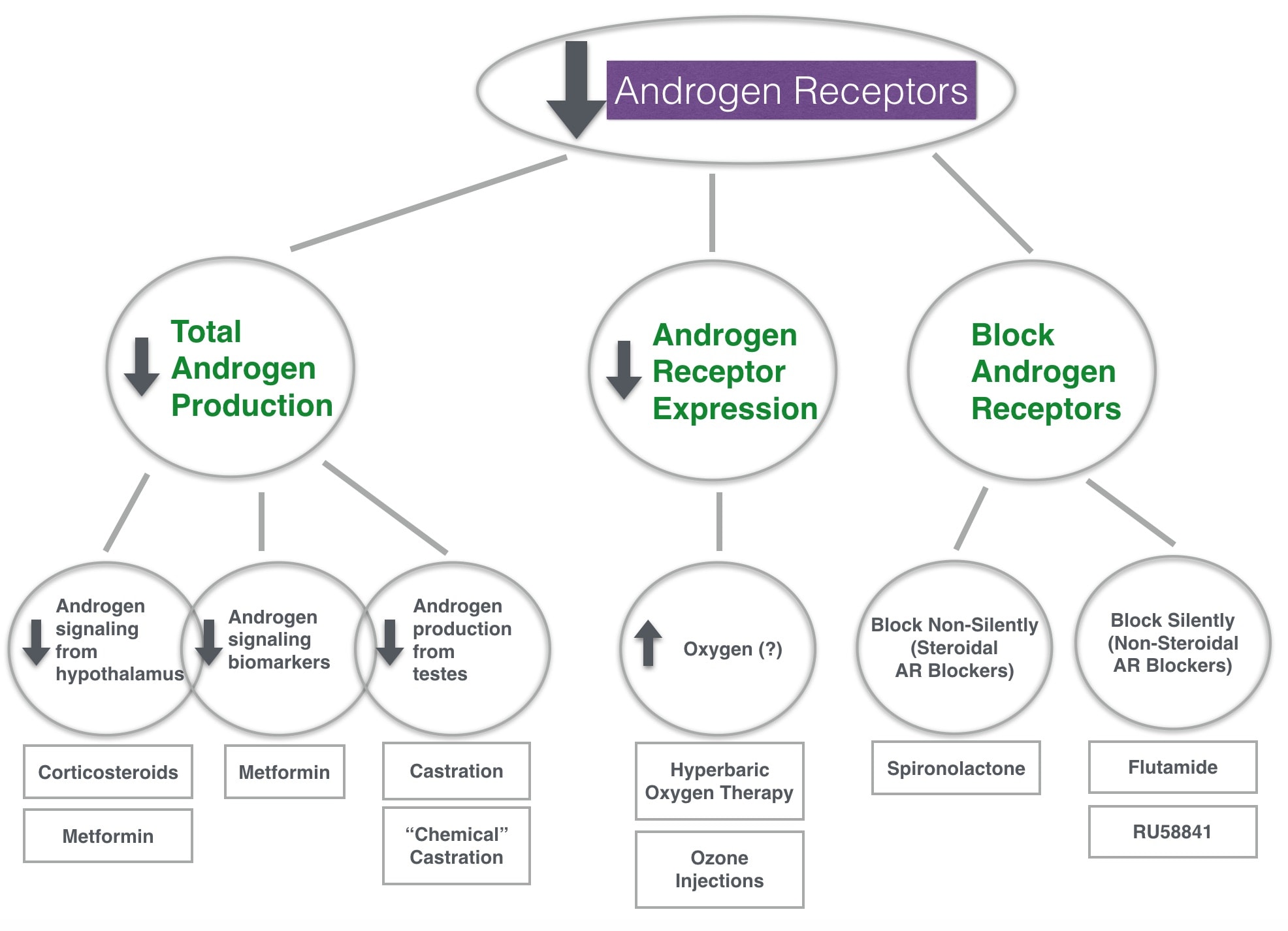 Again, this article series is only here to present a handful of angles and mechanisms for DHT reduction; it’s not here to compare these angles against one another (as most of them haven’t been studied for the treatment of pattern hair loss).

In any case, let’s add these discoveries to our master flowchart, which is just one article away from completion. (The chart is getting big, so click on it to enlarge.) 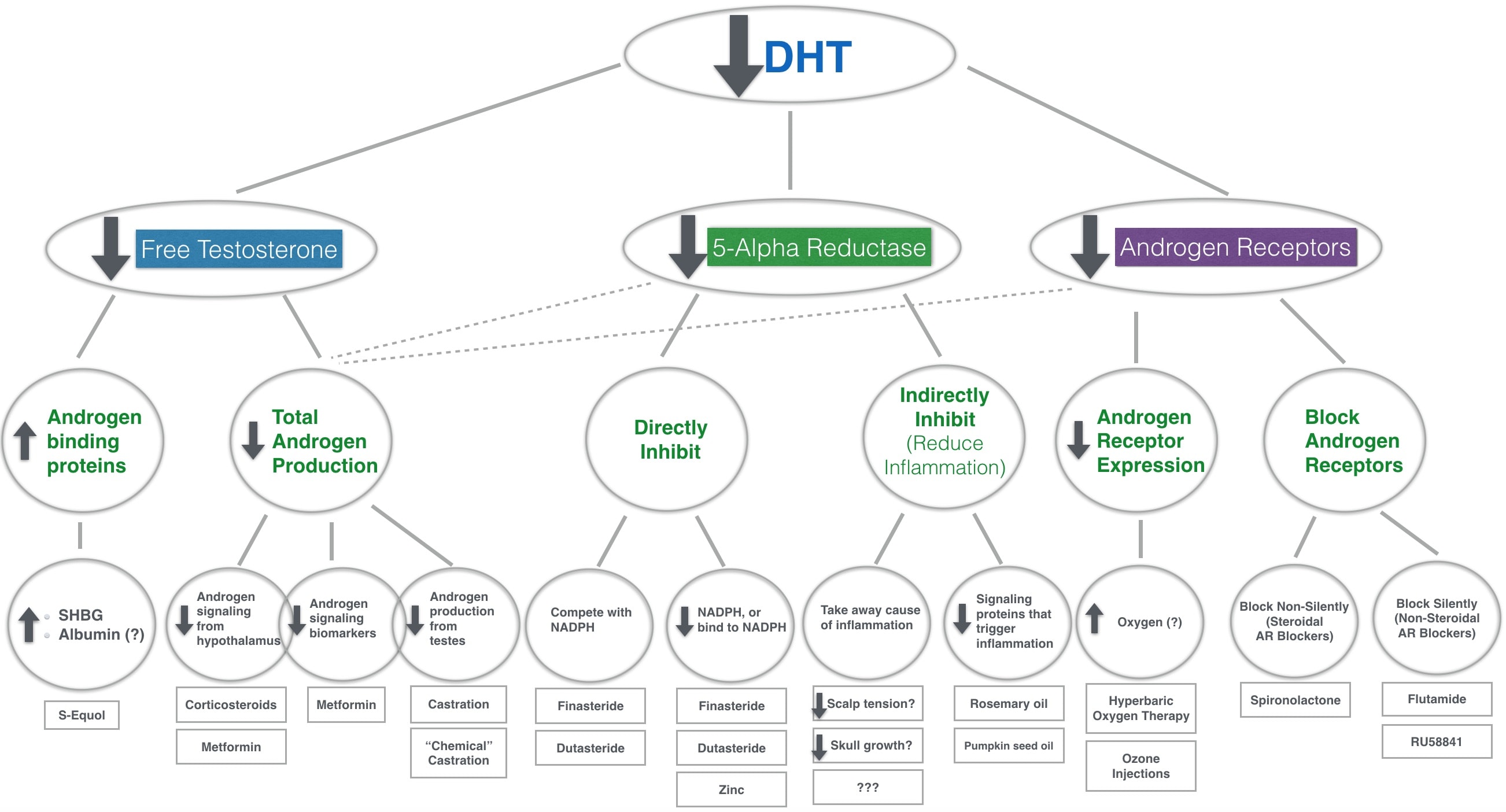 When it comes to reducing DHT in hopes of stopping hair loss, we’ve covered…

But there’s still a fourth DHT-reducing pillar we haven’t discussed. What is it?

In fact, research in increasing DHT metabolism might hold promise for hair loss sufferers looking to decrease scalp tissue DHT but avoid the sexual side effects of DHT reduction. This is all covered in the next (and final) article – where we will complete our Master Guide To The Mechanisms Behind DHT Reduction.

26 thoughts on “Part 3 Of 4: Attacking DHT By Decreasing Androgen Receptors”