Saw Palmetto: Is It As Effective As Finasteride?

Saw palmetto is less effective than finasteride for treating pattern hair loss – with clinical studies showing lower response rates and regrowth rates in men taking 320mg of saw palmetto versus 1mg of finasteride daily. However, saw palmetto is also associated with fewer sexual side effects. This means that choosing between finasteride and saw palmetto depends more so on your risk tolerance for side effects, and whether you plan on combining saw palmetto with other treatments to make up for its lower efficacy. Read on to uncover the studies and the science. 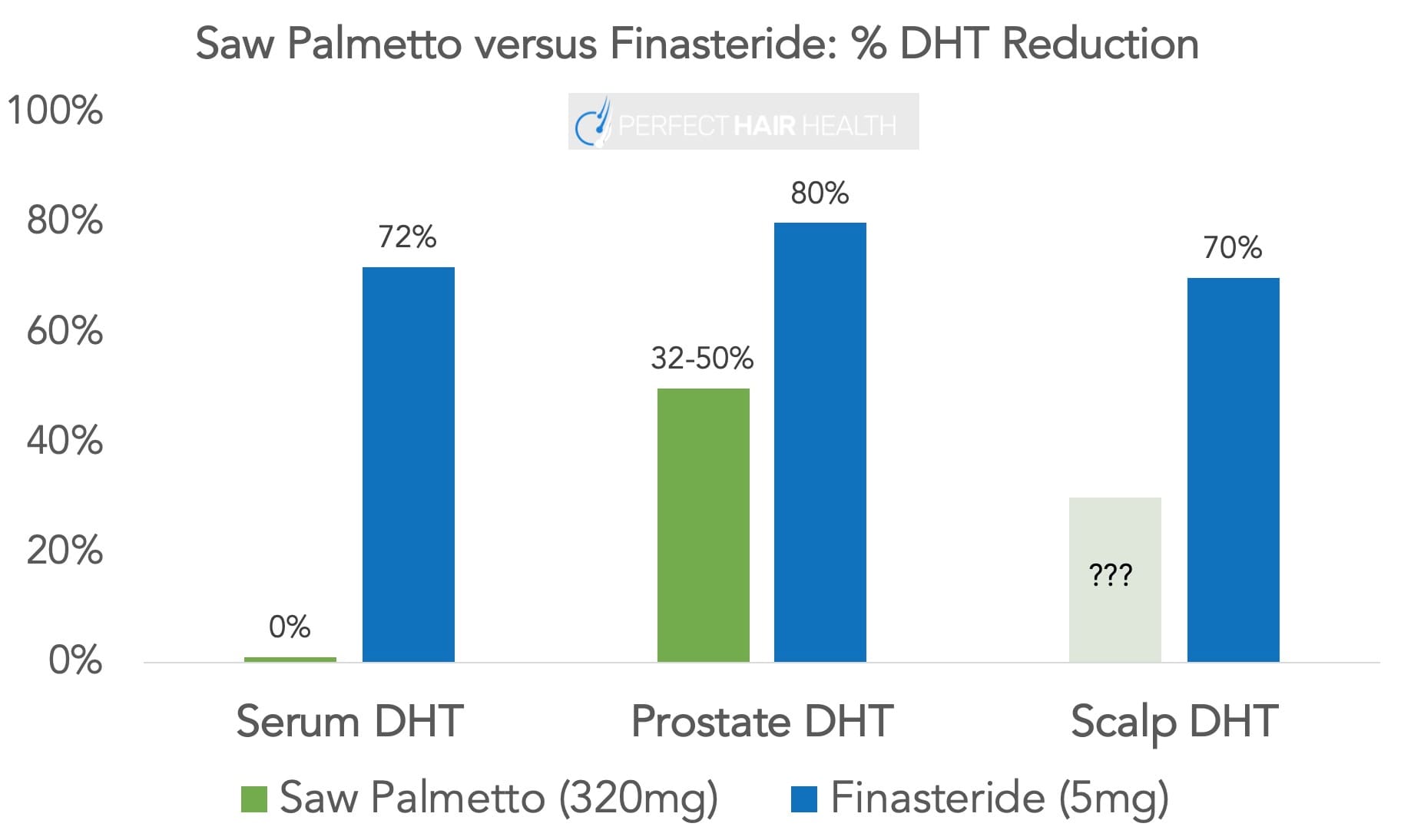 Saw palmetto for hair growth: does it stack up to finasteride?

But is saw palmetto as effective as finasteride?

Not quite. In fact, a closer look into the research on saw palmetto reveals that taking this supplement also comes with risks.

This Quick Win dives into the details (and answers). The bottom line: saw palmetto isn’t as powerful as finasteride, but it also comes with some upsides that may make it a better option, at leaast for certain hair loss sufferers.

Note: Quick Wins are short articles focused on answering one question about hair loss. Given their specificity, these articles are written in a more scientific tone. If you’re new to hair loss research, start with our long-form articles.

What is saw palmetto? 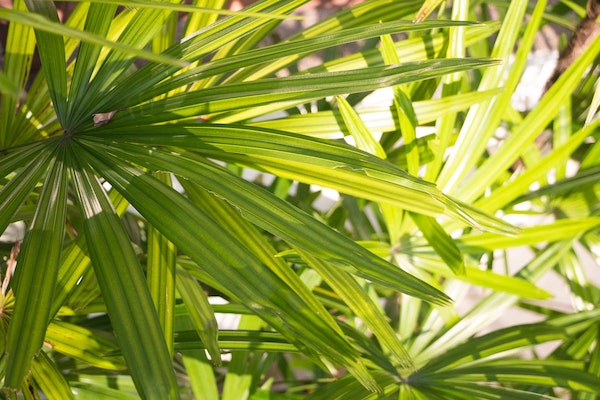 Thirty years ago, researchers discovered that certain polyphenol and lipid extracts of saw palmetto could reduce the activity of type II 5-alpha reductase – an enzyme our bodies use to make the hormone dihydrotestosterone (DHT).

Unfortunately, finasteride use is also associated with sexual side effects. This scares a lot of men away from trying the drug. It also leads many of them to wonder…

“If I use saw palmetto instead of finasteride, can I still regrow hair while also reducing my risk of side effects? After all, saw palmetto is natural, and natural often means safer.”

For starters, anything branded as “natural” isn’t always safer. Many natural supplements sold through Amazon and tested by third parties have been found to contain dangerous levels of heavy metals. Moreover, many popular natural extracts – i.e., green tea extract – have been associated with hepatic failure due to the metabolic demands these extracts can place on our livers. (For more information, see my master class).

In any case, if we’re to answer the question, “Is saw palmetto as effective as finasteride?”, we’ll need to evaluate saw palmetto versus finasteride in terms of its (1) expected hair regrowth, and (2) risk of side effects.

The rest of this Quick Win does just this.

“Hair regrowth” is a non-specific term, and most clinical studies on pattern hair loss define this term differently:

That’s why, whenever we’re diving in studies on hair loss, we standardize the term “hair regrowth” into two categories:

So, if we summarize the data on saw palmetto versus finasteride, how do these two interventions compare? (1) (2)

The key takeaway: compared to finasteride, saw palmetto has a lower response rate and regrowth rate. And when we look at the individual studies that constitute these aggregated estimations, things look a little bleak.

In other words, saw palmetto achieves half the response rate of finasteride, and that if regrowth does occur, it’s not nearly as impressive as what finasteride achieves.

Having said that, it’s not all bad news. That same study also demonstrated that 45/50 men in the saw palmetto group saw a stop in hair loss over the two years that they took it. So, in this one study, saw palmetto showed a response rate of 90%.

This means it’s not a complete stretch to say that most men taking 320mg of saw palmetto daily should see an improvement in their pattern hair loss. It’s just that this improvement won’t be anywhere near on-par what is achievable with finasteride.

Why isn’t saw palmetto as effective as finasteride?

Finasteride is a synthetic azosteroid. It reduces DHT by competing with (and binding to) a coenzyme that our bodies use to make type II 5-alpha reductase – the enzyme that converts free testosterone into DHT.

For reference, see this graph on the DHT-reducing capabilities of both saw palmetto and finasteride, as organized by different tissue sites.

The bottom line: saw palmetto is about half as effective as finasteride because it just doesn’t reduce as much DHT.

What about side effects?

At this point, we’ve really only evaluated half of the question: is saw palmetto as effective as finasteride?

In terms of response rates and regrowth rates, the answer is no. But can saw palmetto make up for its lower efficacy by being a safer long-term supplement for hair loss sufferers?

Long-term clinical studies show that saw palmetto’s overall rate of side effects is just 2%. Moreover, if side effects do occur, they’re relegated more so to gastrointestinal distress than to sexual dysfunction. Even better, many studies on saw palmetto show no change in libido; some studies show improvement to sexual health (at least for men with enlarged prostates). (5) (6) (7)

The “Yelp effect” is a phenomenon where patrons of a business are far more likely to leave a review if their experience was negative rather than positive. Finasteride is a drug that suffers from the Yelp effect, meaning that its sexual side effects are often overstated and amplified online.

Having said that, side effects do occur. Moreover, the self-assessment questionnaires filled out by participants in large-scale clinical trials for finasteride were worded in such a way where under-reporting certain side effects were more likely than not (but that’s for another article).

In any case, finasteride use does come with a heightened risk of side effects. Depending on which study you cite, between 1% and 25% of finasteride users will report issues ranging from brain fog to depression to sexual dysfunction. (8) (9) Moreover, when side effects are reported, they seem to be of higher magnitude versus saw palmetto.

Saw palmetto or finasteride: which one is right for you?

It depends on your risk tolerance for side effects, and whether you plan on combining saw palmetto with other treatments, therapies, or procedures to make up for its lower response rates and regrowth rates.

Having said that, making these choices will depend entirely on someone’s needs, preferences, and unique hair loss situation.

Anything else to know?

Unlike finasteride, saw palmetto isn’t standardized. Serenoa repens growing conditions, extraction methods, and manufacturing practices can all impact the composition, bioavailability, and absorption of each saw palmetto supplement. In fact, these differences might explain the variances in response rates and regrowth rates seen across saw palmetto studies.

So, if you’re looking for a more comprehensive guide on how to use saw palmetto – including recommendations for dosages, extraction practices, and combinations therapies – see our saw palmetto ultimate guide here.

In order to evaluate whether saw palmetto is as effective as finasteride, we need to understand how the supplement compares in terms of (1) response rates, (2) regrowth rates, and (3) risk of side effects.

Saw palmetto isn’t as effective as finasteride in terms of its response rates or regrowth rates, but it also seems to cause fewer (and less severe) side effects. Because of this, making the choice to use saw palmetto over finasteride depends entirely on someone’s risk tolerance for side effects, as well as whether they plan on combining the supplement with other treatments, therapies, or procedures to make up for its less-impressive efficacy.

Otherwise, if you have any questions, please feel free to leave them in the comments section.

9 thoughts on “Saw Palmetto: Is It As Effective As Finasteride?”