When it comes to decreasing dihydrotestosterone (DHT) to slow or stop hair loss, most people only know one way to do it: inhibit the enzyme 5-alpha reductase.

But did you know we may also be able to lower DHT using bacteria? Or blocking androgen receptors? Or increasing DHT metabolism? Or maybe even decreasing inflammation, increasing tissue oxygen, and upping the presence of large protein molecules in our blood?

That’s why I wrote this article series. You’ve probably read click-bait hair loss articles about a certain drug, food, supplement, or regimen that claims to reduce DHT levels. But have you ever wondered how these treatments reduce DHT levels? By the end of this series, you’ll no longer have to ask this question.

We’re going to dive into all of the best (and worst) ways we can fight DHT in hopes of slowing, stopping, or reversing pattern hair loss.

We’ll start with the DHT-hair loss connection, and by the end, we’ll uncover…

The objective: to create a Master DHT Reduction Flowchart. This is a systematic, scientific overview of nearly all the conventional (and unconventional) ways to reduce DHT. Some mechanisms might help reduce hair loss… most won’t. But by the end, you’ll have a concrete understanding of all DHT-reducing possibilities.

This way, the next time you read an article about a certain “DHT blocker” or “DHT reducer” – you’ll instantly understand how it works, if it’s effective against hair loss, and what the dangers are (or aren’t) of trying it.

This series is educational. I do not endorse any specific mechanism as the “best” method. As you’ll see – especially in this article – some of these mechanisms are downright horrifying.

In any case, let’s get started. Our focus for this article: reducing DHT by reducing free testosterone (more on this soon).

Why Focus On DHT For Hair Loss?

Since the discovery of testosterone in 1935, researchers have believed that androgens (like testosterone or DHT) play some sort of role in pattern hair loss. Their rationale? Men bald more often than women, and coincidentally, men have much higher androgen levels.

It was an interesting observation… But the hair loss story was still incomplete. Why? Because testosterone isn’t the only male androgen. There are other hormones made from testosterone that might be more at fault for hair loss. And if researchers wanted to create a viable treatment for hair loss, they’d need to get more specific and uncover the exact hormone causing the problem.

Then came an observational study on men with a rare genetic mutation: a type II 5-alpha reductase deficiency. This is the enzyme our bodies use to turn unbound testosterone into DHT in our scalps and prostate glands. The study’s findings: men with this deficiency suffered from poor genital development and no body hair… but they also never went bald later in life.

This narrowed the scope: maybe it wasn’t testosterone that caused hair loss… but rather DHT.

The key takeaway? It’s likely that DHT plays some sort of causal role in pattern hair loss. And if we want to reduce hair loss (or even reverse it), maybe we should try to reduce our DHT levels.

This was the basis for FDA-approved hair loss drugs like Propecia (finasteride) and off-label drugs Avodart (dutasteride). These drugs reduce DHT, and they’re clinically proven to help slow, stop, or even partially reverse pattern hair loss and hair thinning.

How Is DHT Made?

There are many conversion pathways to making DHT. But when we boil it down, all (or nearly all) DHT is made from the hormone testosterone. And for the majority of DHT creation, our bodies need these three things:

If we had to break this down into a crude formula:

You probably picked up on this, but we just laid down three angles of attack against DHT:

Why? Because without free testosterone or 5-alpha reductase – DHT can’t form. And without androgen receptors – DHT can’t exert any effect on a tissue (like, for example, hair loss).

So let’s dive into each angle of attack. This article only covers free testosterone. The next two will cover 5-alpha reductase, androgen receptors, and a lesser-known DHT reducing mechanism that very people ever consider.

Of all the ways to reduce free testosterone, there appear to be two major ones relevant to pattern hair loss. The first: increasing testosterone-binding proteins. 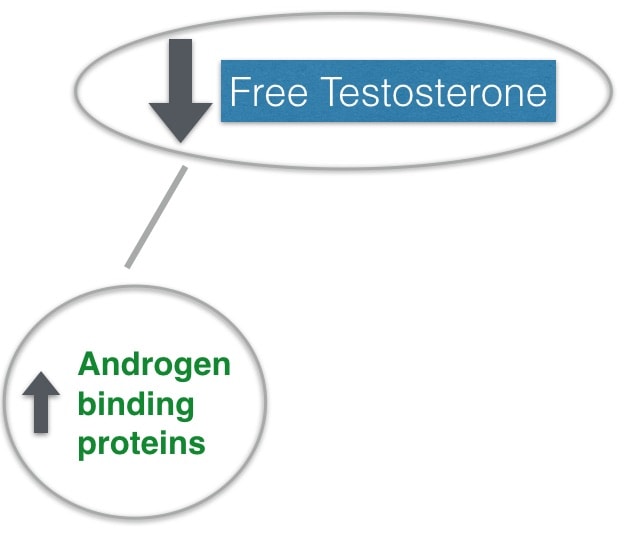 Remember how testosterone must be unbound (free) in order to convert into DHT? Well, if testosterone is bound, it can’t make that conversion. That means if we bind more free testosterone to certain proteins and enzymes, we can reduce the chances of free testosterone binding to the enzyme 5-alpha reductase and then becoming DHT.

It’s unsurprising that low levels of SHBG are seen in young women with diffuse hair thinning, or that lower levels of sex hormone binding globulin are observed in completely bald men.

The takeaway: maybe by increasing SHBG, we can decrease free testosterone, maybe decrease DHT levels, and maybe even improve our pattern hair loss.

There are countless foods, supplements, and drugs that help increase SHBG (and decrease free testosterone). We’re not going to cover all of them. But we are going to cover one of particular interest – a supplement known as S-Equol.

S-Equol is bacterially derived from daidzein, an isoflavone abundant in soy foods.

Isoflavones may increase the production of SHBG (sex hormone-binding globulin) in the liver and bind to biologically active testosterone. This results in the lowering of free testosterone.

The less testosterone in scalp tissue, the less likely it will be converted into DHT – theoretically reducing the risk of pattern hair loss. In fact, this has been validated.

One study demonstrated that short-term administration of soy isoflavones stimulated the production of serum equol and decreased the serum DHT (DHT in the blood).

But do soy isoflavones also decrease DHT in scalp tissues? Unfortunately, we don’t know. There haven’t yet been any studies to confirm this. And just because S-Equol reduces serum DHT doesn’t mean we can say it also reduces scalp tissue DHT. And when it comes to fighting pattern hair loss, scalp tissue DHT is what really matters.

Can Other Proteins Bind To Testosterone And Decrease DHT?

Should We Take S-Equol To Reduce DHT And Fight Hair Loss?

Until S-Equol is studied extensively for its effects on 1) scalp tissue DHT, and 2) pattern hair loss – we won’t know if it’s a viable treatment for hair loss sufferers.

Here’s a summary so far:

This is the first major way of reducing free testosterone (and thereby DHT). There’s one more, and this one comes with much higher risk: suppressing total androgen production.

Please be warned: the following is educational. I don’t endorse any of what’s about to come. 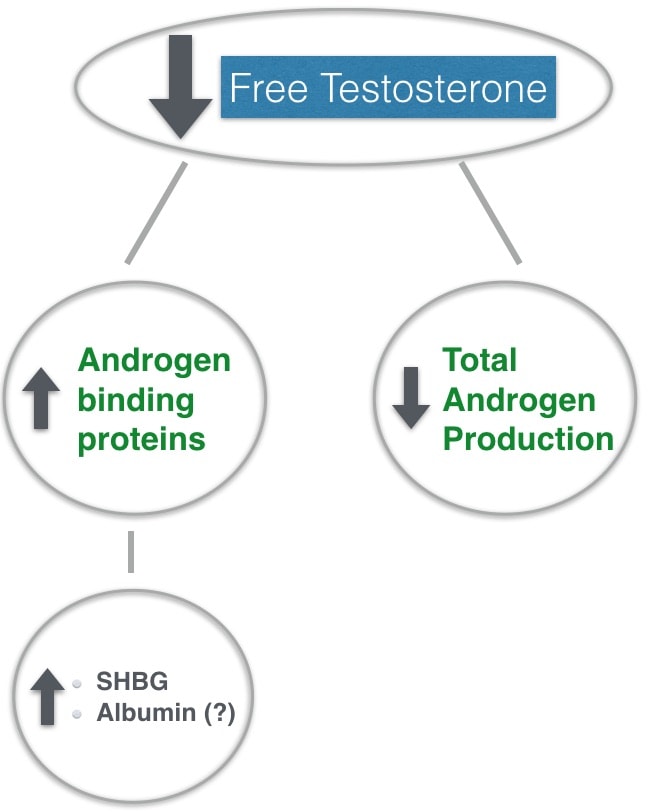 Our brain – or specifically our hypothalamus – determines how much testosterone our bodies should produce. In fact, our hypothalamus sends this message to our testes – which produce 95% of testosterone for men. Together with this messaging, the testes then synthesize testosterone from cholesterol and send it out through our bloodstream. It’s here that our testosterone then binds to proteins and enzymes – converting into different androgens and performing hundreds of bodily functions.

You might’ve already guessed it, but if we want to reduce DHT by reducing our body’s production of androgens, we just laid out three more levers:

Let’s take these one-by-one. And please, don’t try any of these. Seriously. It’s just a bad idea.

1. Decrease Androgen Signaling From The Hypothalamus

Certain steroids and drugs can reduce our body’s desire (or ability) to produce testosterone. For example, steroids known as corticosteroids – through unknown mechanisms – can reduce the amount of testosterone our bodies decide to produce. This may be due to the drugs muting androgen signaling needs from our hypothalamus.

Unsurprisingly, cholesterol-lowering and insulin-lowering drugs (like Metformin) have also been shown to reduce total testosterone production. While the mechanisms aren’t entirely clear, this may be due to brain signaling response changes. For instance, the hypothalamus might tell the testes to produce less testosterone if it senses we have lower levels of circulating cholesterol and insulin. And the less free testosterone we produce, the less there is to convert into DHT – the alleged “hair loss” hormone.

Unfortunately, when we mute testosterone production, we pay a steep price. When we manipulate our brain’s signaling so that our hypothalamus tells our testes to produce less testosterone… our testicles can actually start shrinking.

This is called hypogonadism – a condition that’s twice as prevalent in men taking statin (cholesterol-lowering) drugs. And if we suppress testosterone production for too long, our testicles can shrink to a size of complete dysfunction.

In a sense, this is “chemical castration” – taking testosterone-suppressing drugs at the consequence of rendering our testes lifeless…

…Which brings us to the extreme end up the spectrum: cutting off the ability for our testes to produce 95% of our body’s testosterone.

In some forms, this is just the end-result of long-term testosterone-suppressing drug use. But at its very extreme, this is removal of the testicles.

Yes, I’m talking about castration. Yes, this is the ultimate DHT suppressor. And yes, this a terrible idea. If you’re looking to live a life with a near-absent libido, poor-to-no erection quality, depression, and possibly even a higher susceptibility to certain diseases and cancers – this is what life is like for some male castrates.

I don’t know about you, but I’d choose baldness over castration any day – chemically-induced or otherwise. So please, don’t get any ideas. 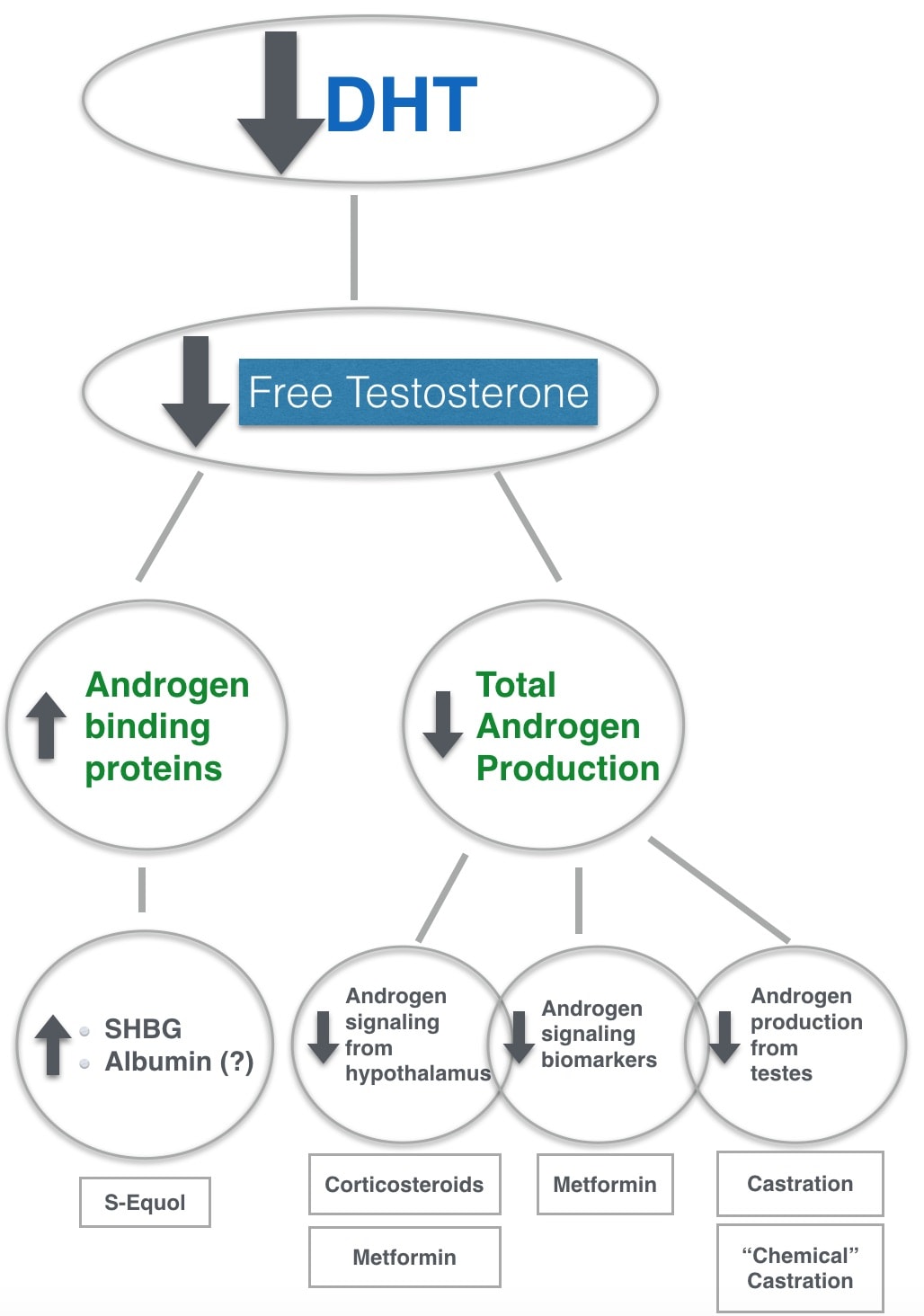 Above all: stay away from drugs that suppress total androgen production. While it’s not covered in this article, even treatments like testosterone replacement therapy can, over time, decrease your body’s ability to produce endogenous testosterone – or in other words, testosterone from the testes. The end-result? Hypogonadism. Which is ironic when you consider that both suppressing testosterone production and injecting testosterone outside the body can both result in shrunken testicles.

The good news: the next article uncovers slightly better ways of going about reducing DHT for pattern hair loss. The third article dives into some very effective topicals. And the final article uncovers DHT-fighting breakthroughs almost no one is talking about.

In the next article, we’ll uncover DHT’s second “angle” of attack – reducing DHT by inhibiting the enzyme 5-alpha reductase. And if you think Propecia, Avodart, or even “natural” supplements like saw palmetto extract or pumpkin seed oil are the only ways to reduce this enzyme… think again.

31 thoughts on “Part 1 Of 4: Attacking DHT By Reducing Free Testosterone”