Why Most Hair Loss Topicals Fail To Regrow Hair

Will These Topicals Reverse Your Hair Loss?

People often ask me if a new topical mentioned by a doctor, website, or hair loss forum will help regrow their hair. Here’s a running list from my emails just last week:

In the last decade, if there’s anything I’ve learned about topicals, it’s this: topicals are a shot in the dark.

What works for one person does not work for 99% of others. I’ve experimented with almost all of the above topicals, and for months at a time. None of them helped regrow my hair.

With that said, my story isn’t everyone’s story. Sometimes people get lucky. Sometimes a person uncovers a topical that gives them significant regrowth.

But why is that? How can one topical regrow hair for one person but not for everyone else?

That’s what this article is about.

Why Most Topicals Fail To Regrow Any Hair

Interestingly, our genes and gene expression also influence how well we respond to hair loss drugs.

Studies show that Propecia is more effective for those with certain gene variants (polymorphisms). For reasons not yet understood, people who have these polymorphisms and take Propecia tend to recover more hair than those without them.

We can apply that same logic to any hair loss topical – like Rogaine.

Rogaine’s mechanisms are mysterious, but most experts agree that Rogaine helps boost blood flow to hair follicles – in addition to modulating prostaglandin activity in epithelial and dermal papillae cell sites. However, the magnitude of effect that Rogaine will have probably depends on a person’s…

All of these markers link back to our genes (and gene expression). Genetics likely explains why some men and women using Rogaine regrow some hair, while others (like myself) see no changes at all.

But this is just one reason. That’s not all that’s going on.

There are a million different reasons why someone starts losing their hair. Telogen effluvium-related hair shedding is linked to stress, nutrient imbalances, and chronic conditions like hypothyroidism or heavy metal toxicities. Pattern hair loss is linked to increased scalp DHT. And for pattern hair loss sufferers – there’s also a gradient of involvement of scalp DHT. Some DHT arrives to the scalp by favoring the 5-alpha reductase pathway; some DHT might favor alternative pathways – thus making 5-alpha reductase inhibiting drugs less effective.

Unfortunately, most hair loss topicals target just one or two “targets” of the myriad possibilities for why you might be losing hair.

So, without guidance, how likely is it that we pick a topical that also happens to target the same triggers of our own hair loss?

Not very likely. And when you factor in other issues for less-studied substances – i.e., half lives of ingredients – things become even more convoluted.

This sort of thing happens in hair loss forums all the time. Here are two examples.

In September 2013, a researcher published a paper about how he used a pig fat (lard) topical for his own personal hair regrowth. This researcher massaged five grams of fat (lard) into his scalp each night before going to bed. After eight months, he’d regrown a ton of hair: 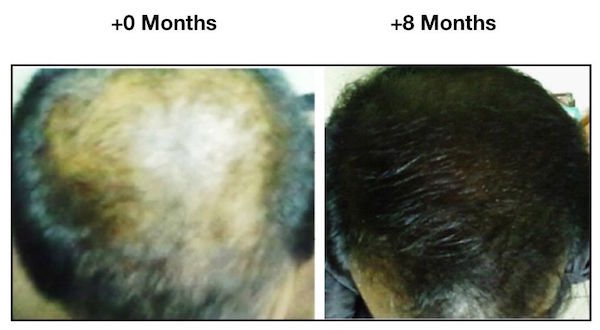 This study got posted on hair loss forums, and within days, its popularity exploded. Dozens of forum users decided to commit to the methodology for eight months and try to validate its results.

After a month people’s excitement started to sizzle. After two months the thread got buried to the forum’s second page. After three months people forgot the study had ever been posted. And after eight months none of the “testers” posted a single before-after picture. Of the testers who finished the experiment (to my knowledge – just two), none claimed any results.

This story isn’t unique. This is the typical trend with any treatment on any hair loss forum:

For purposes of this article, let’s assume that of the testers who tried this topical, they tried it correctly and for the entire eight months, and it still didn’t work. Let’s forget about the possibility that most testers who faded away probably didn’t even commit to the regimen (which is probably the reality).

Why would this lard topical work for the author but not everyone else? Well, there are a variety of possibilities:

Many years ago researchers conducted a study on aromatherapy essential oils’ effects on hair growth for people with Alopecia Areata.

Alopecia Areata is an autoimmune disease in which the body attacks the hair follicle, often leading to hair fall in patches and everywhere (even on the scalp sides).

The researchers tested a cocktail of thyme, rosemary, lavender, and cedarwood essential oils inside a mixture of jojoba and grapeseed. The instruction: massage these oils into the scalp, daily, for 2+ minutes.

The results were incredible.

44% of users saw hair improvement. Some even saw full recoveries: 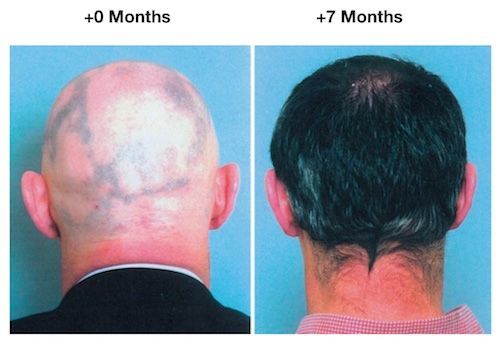 Again, this study made its rounds through hair loss forums. People got excited. Many pattern hair loss sufferers said they would attempt to replicate the study and try it themselves.

Months later those threads went quiet. We never saw any before-after photos from those who said they’d commit to the regimen.

Why did this essential oil topical work for those in the study and not for the forum testers?

Why Essential Oils Don’t Regrow Hair For Everyone

This one is kind of obvious. The study was for people with alopecia areata – not male pattern hair loss.

Alopecia areata is an autoimmune disease where the body begins recognizing hair follicles as invaders, and then begins to attack and destroy them.

Those with alopecia areata don’t necessarily have any of the scalp conditions associated with male pattern baldness (calcification, fibrosis, higher tissue DHT, etc.).

I don’t have any topical recommendations. I think most are a waste of money, and that most don’t target the key drivers of most hair loss disorders to a high enough magnitude to elicit lasting, appreciable hair regrowth for  most people.

But if you’re going to try a topical, do the following:

Otherwise, you won’t have any idea what’s helping.