Alopecia areata (AA) is an autoimmune form of hair loss that impacts 2% of people worldwide. It's caused by an unknown driver of inflammation that disrupts hair follicle stem cells, leading to slick-bald patches and (sometimes) exclamation-mark hairs. Fascinatingly, AA can spontaneously reverse in 34-50% of patients. Even in cases of long-standing AA, fecal microbiota transplants have led to incredibly hair recoveries. Read on to learn the science behind AA: what we know, what we don't, and the treatment breakthroughs that may make this hair loss disorder a thing of the past.

Alopecia areata is an autoimmune form of hair loss that affects 2% of people worldwide. If you’re dealing with alopecia areata, the burden of hair loss often feels overwhelming – as the condition can progress rapidly, inexplicably, and without regard.

Fortunately, alopecia areata is treatable. In many cases, it’s also reversible. The first step toward making progress? Understanding alopecia areata, its myriad triggers, and how these factors relate to your unique hair loss situation.

In this article, we’ll uncover the characteristics of alopecia areata: its clinical presentations, histological features, and more. We’ll also dive into alopecia areata’s causes: what we know, what we don’t, and what this type of hair loss can tell us about our health.

Finally, we’ll outline treatments for alopecia areata (both conventional and natural): the research supporting them, the expectations for regrowth, and who might be the best candidates for each intervention.

What is alopecia areata?

You might know alopecia areata (AA) from its “patchy” presentation, whereby slick-bald patches begin to form in a non-uniform fashion. But AA can also vary in appearance – and even mask the look of many other common hair loss disorders.

What’s the histology of alopecia areata?

Histology is a term used to describe a close-up view of a tissue’s structure. In the world of hair loss, histology refers to the microscopic view of a hair follicle (i.e., what a hair follicle looks like when biopsied).

When doctors are uncertain about someone’s hair loss diagnosis, they’ll often take a biopsy of their patient’s scalp so that they can get a look of the histological features of the affected hair follicles. Then, they’ll compare what they see against the histological hallmarks of certain hair loss disorders.

It might sound invasive, but these scalp biopsies are perhaps the most effective way for dermatologists to definitively diagnose someone’s hair loss. And when it comes to alopecia areata, this type of hair loss has a lot of interesting features:

Pattern hair loss, also known as androgenic alopecia (AGA), is also often defined by the presence of inflammation, hair follicle miniaturization, and even an increased number of catagen and telogen hairs. This begs the question: how can we distinguish between AGA and alopecia areata… especially in cases where alopecia areata is diffuse?

Well, there are some additional factors that can help us identify if we’re dealing with alopecia areata (AA) or androgenic alopecia (AGA).

To reiterate from earlier, inflammation seems to initiate of AA. The process looks like this:

This begs the question… when it comes alopecia areata, what causes the inflammation that kickstarts the whole process?

What causes the inflammation in alopecia areata?

While the exact origin of inflammation isn’t known, researchers have a good idea of three contributing factors: genetics, environmental triggers, and loss of immune privilege in the follicle.

And though we don’t know the exact nature of these contributing factors, researchers have begun to uncover some of the details:

What are the available treatments?

Currently, there are a variety of drug and non-drug treatments for AA. But before we reveal them, there are two things worth mentioning:

Regardless of these factors, it seems like treating AA in earlier stages leads to better outcomes and decreases the risk of future treatment resistance. So, if you’re facing AA right now, it’s best not to place your bets on a spontaneous reversal; rather, hedge those bets with the treatment options at your disposal (or at least the ones you’re comfortable trying).

The following sections detail many conventional and alternative treatments: the evidence, best practices, mechanisms of action, and more.

Fecal microbiota transplant (FMT) is a procedure whereby gut bacteria are isolated from a donor’s feces, purified, and then transplanted into an FMT candidate. This is the only procedure in which bacterial strains that have been lost from the gut can be reinoculated.

Currently, the procedure is elective in Europe (anyone can elect to have it performed). But in the U.S., it’s only available for chronic C. difficile infections. In the U.K., Taymount Clinic is one of the most popular worldwide-serving clinics for elective FMT.

FMT before & after photos

Case #2: (A) The patient’s scalp when his AA first began (B) a few months, (C) 1.5 years after FMT in alopecia universalis

Case #3: The beginning of hair regrowth after FMT in a case of long-standing alopecia universalis

Case study: ophiasis-type AA before and 3 months after PRP treatment.

There is currently no clinical evidence to support the efficacy of Brotzu lotion in AA. Nonetheless, some initial case studies do show promise. Take, for example, these two before-and-afters: 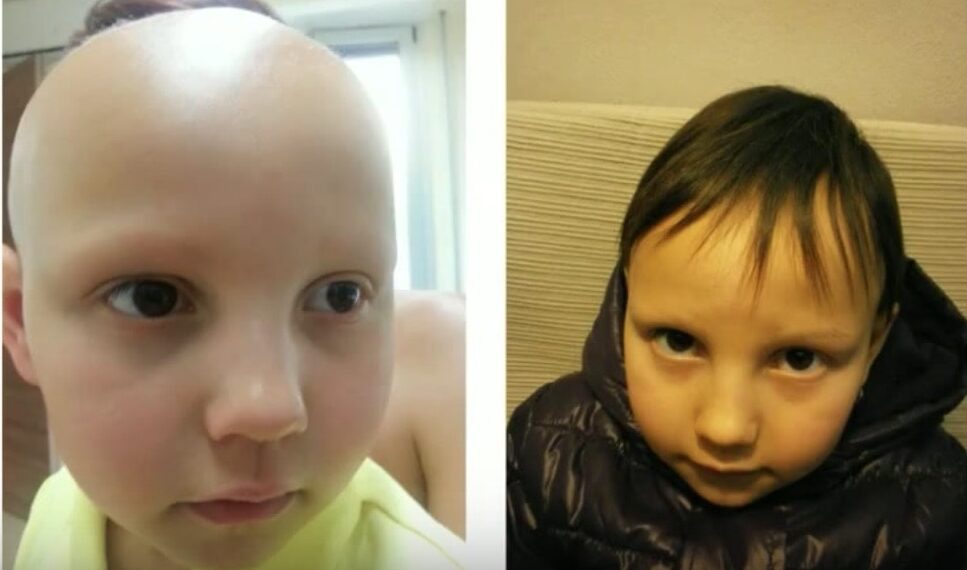 And here’s a case of near-complete recovery of patchy AA in just 16 months from Dr. Brotzu’s presentation at this conference — start at 10:30):

While these are the only case studies we have pictures of, Dr. Brotzu’s patent cites more case studies. This is encouraging for AA patients — especially given it seems confer benefit even in more severe cases, of which are generally more likely to be resistant to treatment.

But it bears repeating: even Dr. Brotzu has claimed it’s difficult to know just how effective the lotion is for AA – mainly because of the spontaneous recoveries.

Helminths, better known as hookworms, are tiny parasites that embed themselves in the small intestines of their hosts.

Helminths are unique in that they have a novel survival mechanism — one that might actually to a broader, modulatory effect on the whole immune system!

The specifics? Helminths “mute” the activity of T-cells, protecting them from destruction by the host’s immune system. This is accomplished through the stimulation of Tregs, a group of cells that reduce the inflammatory potential of the immune system.

And though research on helminth therapy is still in its infancy, preliminary studies suggest that this evidence might just translate to real-world efficacy. In fact, the therapy has shown promise for a variety of disorders, ranging from inflammatory bowel disorders to allergy all the way to mouse models of multiple sclerosis, an autoimmune disorder.

Considering this evidence, it’s not surprising that Moises Velasquez-Manoff, a male with alopecia totalis, reported hair growth for the first time in years following his experimentation with helminth therapy. He details his experience with helminth self-infection, alongside a historical perspective of helminth eradication, in his book: An Epidemic of Absence.

While this evidence alone is certainly not enough to warrant self-experimentation with helminth self-infection, this emerging research is compelling and underscores the growing importance of the symbiotic relationship of humans and microbes.

As seen in the outcomes of the different studies, the likelihood of significant (or complete) recovery is relatively high. And, again, a large proportion of AA patients (34-50%) will spontaneously recover within one year.

This is great news! But, it also makes it difficult to effectively estimate the true success rate of treatments. So, is there any way that someone with AA might be able to gauge their likelihood of recovery (or lack thereof)?

Yes. In clinical practices, there are criteria for AA known as “poor prognostic factors” – i.e., things that might make you less likely to experience full hair recovery. According to the literature, these include:

So, if you fit into these categories, chances are your AA might be more treatment-resistant. That being said, it doesn’t mean you can’t recover your hair; it just means that you may need to explore more treatment avenues (or combination therapies) to find what works for your hair loss specifically. Your practitioner can help guide you through identifying these treatment avenues.

With that, you’ll also want to consult your doctor early into the process – as treatment resistance can increase as the condition progresses. As such, it’s better to forego experimental / home remedies and begin a treatment plan right away.

This isn’t to say natural therapies might not be an option for you, but, rather that you should discuss the evidence of those treatments with your doctor and, if suited to you, explore the therapy under their supervision.

This will help avoid treatment resistance that may result from delayed treatment, which would partly mitigate a major poor prognostic factor that is within your control.

Alopecia areata (AA) is a form of autoimmune hair loss characterized by inflammation, exclamation mark hairs, patchy hair loss (in early stages), and hair follicle miniaturization (in later stages). The condition can progress to alopecia totalis (loss of eyebrow and eyelash hairs) or alopecia universalis (loss of hair all over the body). But in many cases, it spontaneously reverses.

Thankfully, a large proportion of AA cases will spontaneously resolve within a year of onset. Having said that, it’s not a guarantee. So, while “waiting it out” may mean you need no treatment at all, it also poses a risk of progression. The further AA progresses, the higher the likelihood of treatment resistance.

So, it’s important that talk to your doctor when you first notice the hair loss. The earlier you catch it, the better your chances of regrowth. This is especially true if:

Nevertheless, a wide array of treatment options do exist — both drug-based and non-drug-based – for manageable and refractory cases alike. Generally, corticosteroids are one of the first-line treatments. When corticosteroids aren’t effective, immunotherapy, methotrexate, JAK inhibitors, and alternative treatments (aromatherapy, vitamins/minerals, microbial modulation, and more) are usually explored.

Overall, the prognosis for most AA patients is good. Having said that, the risk of relapse is still high. This is mainly attributed to the fact that most treatments are confined to suppressing the signaling that leads to AA hair loss, as opposed to mitigating the root cause of AA. We just don’t know enough about the origin of AA to target these causes (yet).

The one exception to this rule might be fecal microbiota transplants (FMT) — a treatment that has shown major hair recoveries for long-standing AA patients (who typically don’t respond well to treatment), and no signs of relapse for those responders (at least within study windows of 1.5 to 3 years). However, evidence on FMT is incredibly limited. Moreover, the treatment is currently not readily accessible in the US (unless you have AA and you’re seeking treatment for a chronic C. difficile infection).

Overall, hair regrowth is absolutely possible for most AA patients — whether through natural or conventional means. Just make sure to get in touch with a doctor as soon as you notice your hair loss, so that they can help direct a treatment plan that’s going to be best suited to your condition.

If you have any questions, please feel free to leave them in the comments!

Rob English is a researcher, medical editor, and the founder of perfecthairhealth.com. He acts as a peer reviewer for scholarly journals and has published two peer-reviewed papers on androgenic alopecia. He writes regularly about the science behind hair loss (and hair growth). Feel free to browse his long-form articles and publications throughout this site.

Perfect Hair Health provides evidence-based methods for regrowing hair – naturally or conventionally. We don’t care about your treatment preferences; we care about your access to unbiased information. See our editorial policies.