In 2012, the dermatology departments of University of Pennsylvania and Johns Hopkins University generated a lot of buzz around a potential “miracle cure” for baldness.

The big discovery? A relationship between prostaglandin D2 (a fatty acid derivative) and male pattern baldness.

The researchers demonstrated, for the first time in humans, that a lipid derivative called prostaglandin D2 was elevated in balding areas – but not in hair-bearing areas – of men with hair loss. More importantly, they also discovered that prostaglandin D2 inhibits hair lengthening. The more prostaglandin D2 present, the shorter a hair grows.

The team suggested that by maybe inhibiting prostaglandin D2 in the scalp, hair loss might be stopped. And that got a lot of hair loss sufferers (and pharmaceutical companies) excited.

Prostaglandin-D2 inhibitors were already in trials as a treatment for asthma. It wouldn’t be hard to develop a topical for men’s scalp using the same technology.

The media went wild, claiming the “cure” for baldness was just around the corner. These researchers began talks with pharmaceutical companies to begin human trials. One article claimed the “cure” for baldness might reach shelves in 2 years. Then came another scientific overview, and even more excitement around the possibility that by inhibiting prostaglandin D2, we might grow back our hair.

So what happened? Does prostaglandin D2 really hold the cure for baldness?

Enter your email. I'll send you a FREE guide on how to reduce PGD2 naturally... No supplements. No drugs. No strings attached. 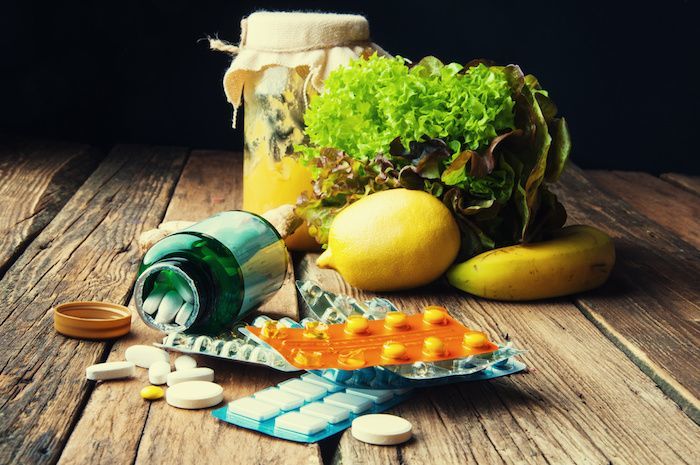 Plus, I'll also send you my recommendations on what to target (beyond PGD2) in order to reverse hair loss. And no, it's not DHT!

Success! Now check your email for the guide.

Important Note: this article was last updated in 2017. Since then, new research has come out clarifying (and contradicting) the role of prostaglandins in androgenic alopecia. As such, this article no longer reflects my exact viewpoints on the subject. We recently published a manuscript about inflammation, prostaglandins and fibrosis – you can read that here.

Prostaglandins have a variety of roles in the “promotion and resolution of inflammation” – like blood flow regulation, blood clot formation, cytokine expression, and even hormone regulation. Their presence changes the way that cells behave – sort of similar to a hormone.

The Bad News About Prostaglandins

In normal amounts, prostaglandins are fine (and even essential). But chronically elevated prostaglandin levels are a bad thing. Prolonged prostaglandin over-expression is associated with more allergies, autoimmune disease, arteriosclerosis, and now even hair loss.

There are many prostaglandin groups – all labeled by their molecular form – but the one that made hair loss headlines was prostaglandin D2 (PGD2).

What Is Prostaglandin D2?

PGD2 is a type of prostaglandin made in our central nervous system and in our skin tissue. On top of hair loss, PGD2 is also the same prostaglandin implicated in asthma. So if you’re also suffering from asthma, you might find the following information relevant.

How Do Our Bodies Make Prostaglandin D2?

In order for PGD2 to influence cell behavior, it has to bind to a cell’s receptor. There are a few different receptors to which PGD2 can bind, but the PGD2 receptor that’s implicated in hair loss is called GPR44.

When PGD2 binds to the receptor GPR44, hair loss soon follows. This is the one-two combination that hair loss sufferers (and preventers) want to avoid.

Prostaglandin D2 is elevated in the bald areas of men with androgenic alopecia. This discovery reinforces previous research showing that in mice, PGD2 increases just before the regression phase of the hair cycle (in other words, prostaglandin D2 increases before hair loss occurs).

Interestingly, researchers also showed that by increasing PGD2 in mice, they can induce hair follicle miniaturization, sebaceous gland hyperplasia, and eventually alopecia. They can use PGD2 to “turn on” pattern hair loss.

So to summarize the the prostaglandin D2-hair loss connection: 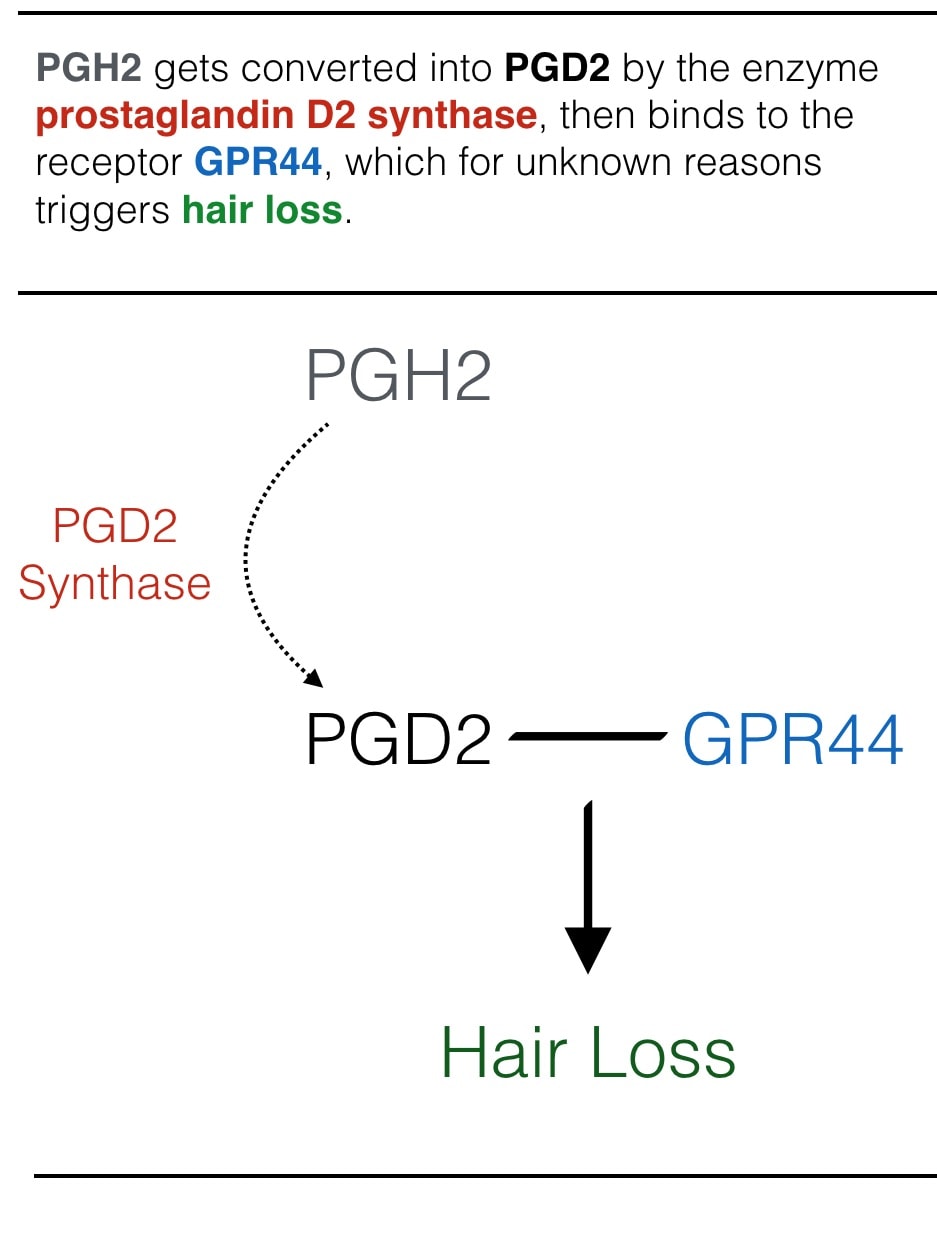 So how can we go about inhibiting PGD2 to protect us against pattern hair loss?

How To Decrease PGD2 (With Drugs)

In order to stop PGD2 from influencing a cell’s function, we need to either…

Scientists are developing drugs to do this by…

Before PGD2 came along, dihydrotestosterone (DHT) was considered the “cause” of hair loss. The argument was as follows:

In our scalps, testosterone gets converted into DHT by the enzyme 5-alpha reductase. DHT then binds to a cell’s androgen receptor, and for unknown reasons, the hair becomes sensitive to DHT and the follicles eventually shrink, leading to hair loss.

The solution for DHT? Block the 5-alpha reductase enzyme or the androgen receptor to decrease the amount of DHT in our scalps and maybe regrow some hair.

So came the creation of Propecia – a 5-alpha reductase enzyme inhibitor – and Spironolactone – an androgen receptor antagonist (blocker).

Here’s a side-by-side of how PGD2 and DHT form. 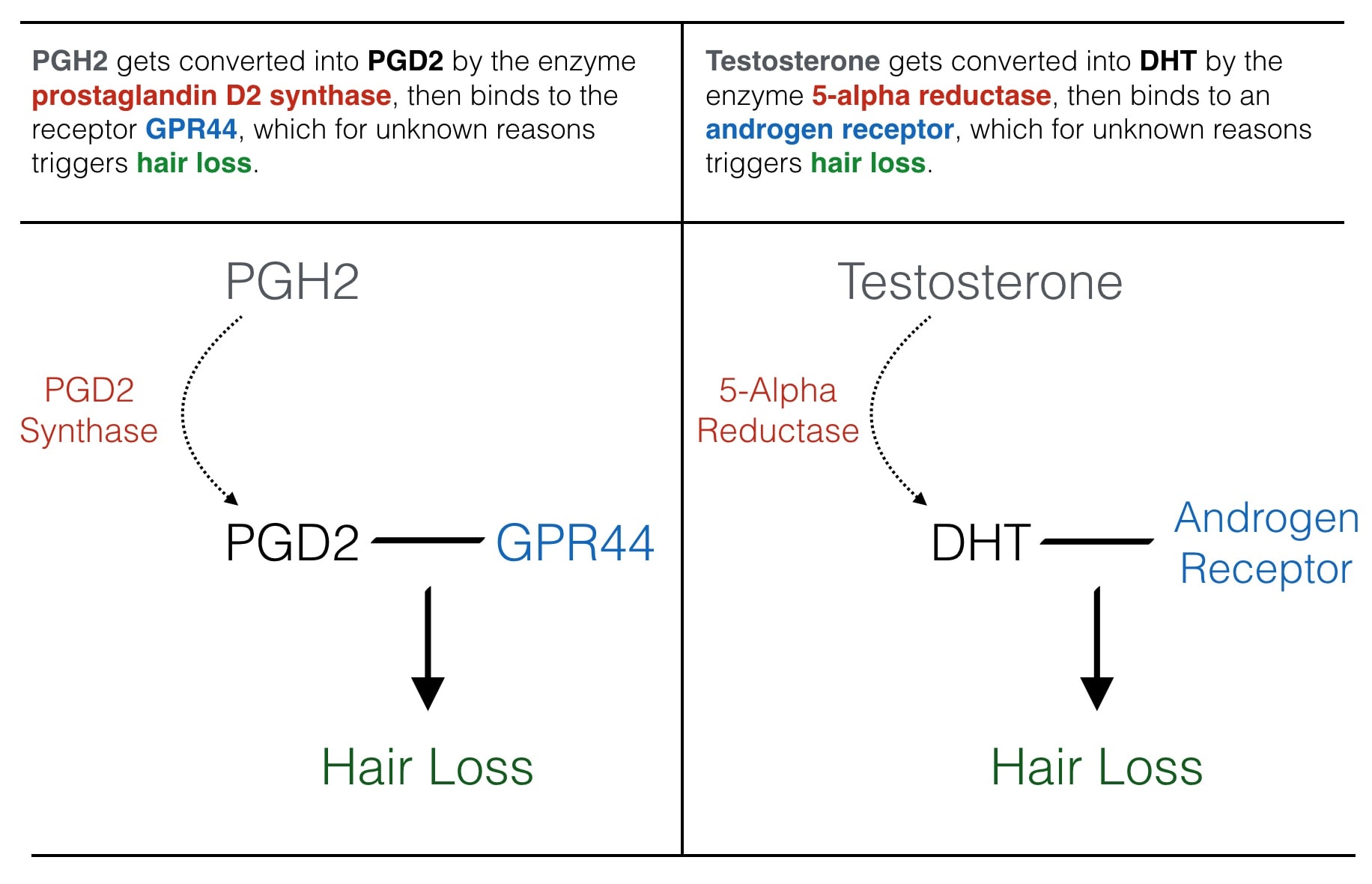 Back To PGD2: The Good News For Pharmaceutical Companies

So are these PGD2 inhibitors helping us regrow any hair?

PGD2 Clinical Trials… No News Yet

Unfortunately, we haven’t heard word about clinical trial results, nor about the original PGD2 trials from a few years back. This makes me assume that the trials aren’t producing significant signs of hair regrowth.

But there are also non-trial participants – hair loss researchers and forum members who compounded their own PGD2 inhibitors. These experimenters have already begun testing PGD2-inhibiting substances and logging their progress on private hair loss forums. The most common PGD2 inhibitor of choice: Setipripant.

So what are their results?

PGD2 Hair Loss Forum Testers… Not Much (If Any) Regrowth

Some testers are reporting an arrest in hair loss. But unfortunately, none are showing significant signs of regrowth… even after a full year of testing.

But it’s not all bad news.

Some researchers have combined PGD2 receptor blockers with PGE2 promoting substances, and with much better success.

Just check out the regrowth results from Swiss Temples. His “prostaglandin protocol” seems like a bit over-the-top – especially with the safety concerns of some of the substances. But it’s reaping results.

These anecdotes suggest that a PGD2 inhibitor + PGE2 promoter is probably better for hair regrowth, especially versus a PGD2 blocker alone. But based on radio silence from the PGD2 trials and the lacking results from others’ anecdotes – it seems like a PGD2 blocker alone isn’t going to regrow much hair.

While research is still ongoing, it might have to do with that question researchers never answered…

How exactly does prostaglandin D2 cause hair loss?

Maybe the answer is that prostaglandin D2 induces something else… calcification.

Calcification is the build-up of calcium deposits in tissues where it doesn’t belong (for example, our soft tissues or our arteries). And studies show that PGD2 is a calcification inducer – meaning that PGD2 triggers calcification.

The bottom line: wherever PGD2 over-expresses, calcification may soon follow.

Calcification Is A Chronic Progressive Condition

The causes of calcification are complex, multifaceted, and not fully understood. But the important takeaway is this:

The connection between calcification and hair loss was made over 70 years ago when researchers observed in those who were bald, the blood vessels supporting those dormant follicles had become completely calcified.

In fact, calcification precedes hair loss. Calcium buildup in our blood vessels restrict blood flow to our hair follicles, which reduces oxygen and nutrient flow to the follicles. This causes the hair to slowly shrink, until it disappears entirely. 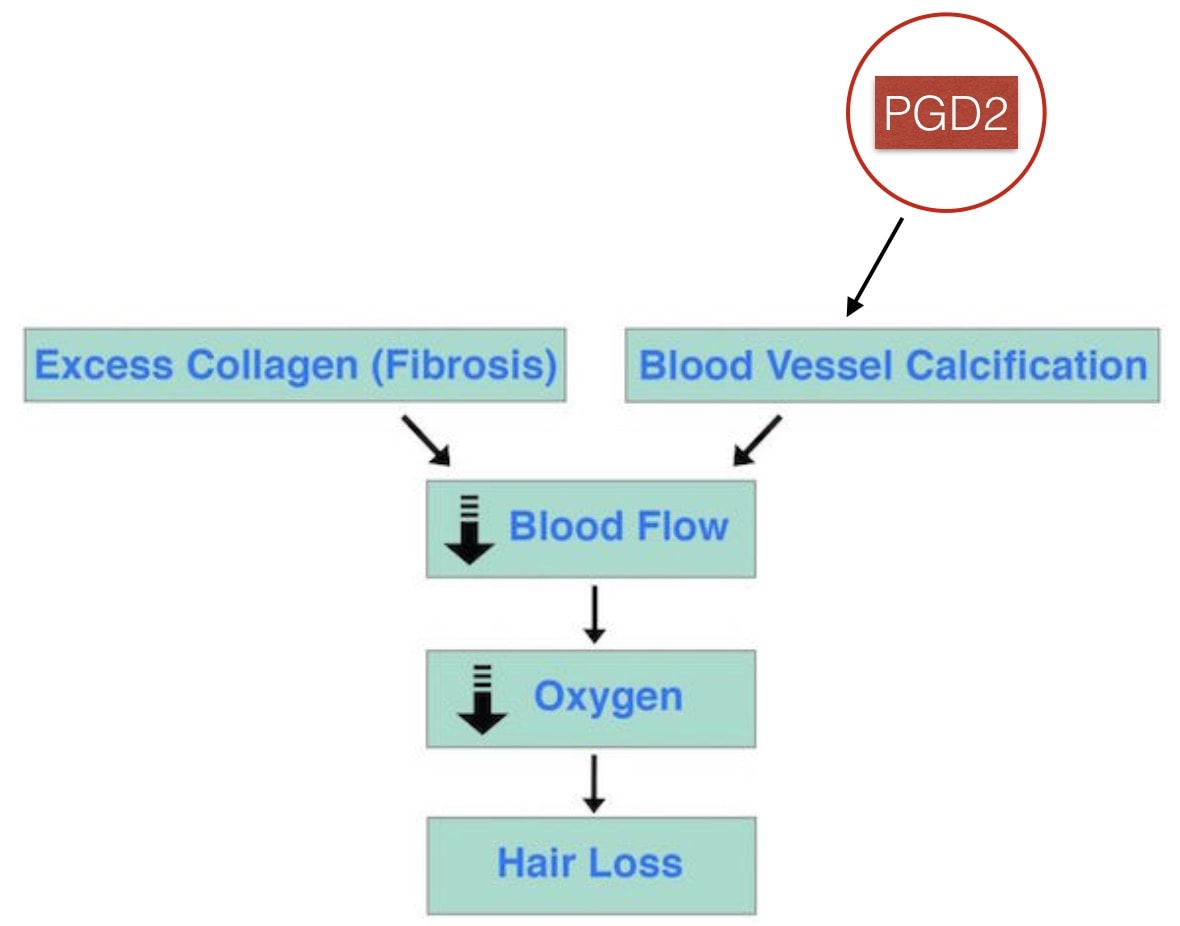 Due To Calcification, PGD2 Inhibitors May Only Stop Hair Loss, But Not Regrow Much Hair

Remember: researchers haven’t yet uncovered exactly how PGD2 causes hair loss. Based on the evidence, my guess is this:

PGD2 induces calcification. That calcification then restricts blood flow to our follicles, until the follicle shrinks and the hair disappears.

If this is true, then it makes perfect sense why a PGD2 inhibitor may only stop future hair loss. If we block PGD2, we prevent future calcification… But we never get rid of the calcification that’s already there.

Why We Should Still Try To Reduce PGD2

It’s still in our best interest to decrease PGD2 expression. Doing so may protect us from hair loss and reduce the symptoms of allergies (and even asthma).

So, is there any way we can go about doing this naturally? Without drugs that haven’t completed the rigor of human trials?

How To Reduce PGD2 (Naturally)

PGD2 is derived from arachidonic acid, which is an omega 6 fatty acid.

Omega 6 fatty acids are found predominantly in cooking oils (think: canola, olive, safflower, sunflower, and corn), but are also prevalent in many processed foods. They’re considered to activate many pro-inflammatory pathways in the human body.

Going Back To Asthma: Linking Together PGD2, Arachidonic Acid, and Diet

As you ingest higher levels of arachidonic acid, you might also increase the expression of pro-inflammatory messengers in the body – like PGD2. This can lead to a variety of chronic ailments, one of which is asthma.

This was recently evidenced in a large-scale study on children’s diets from 2010. Researchers found that children who ate 3+ burgers a week were at a higher risk for asthma, whereas children who ate more fish and fruits were at a much lower risk.

What’s important to note isn’t that these children were eating burgers… It’s that these children were eating a higher ratio of omega 6 to omega 3 fatty acids (~15:1), and thereby more likely to over-express PGD2 and other inflammatory biomarkers (the indicator being their asthma symptoms). The end-result of prolonged PGD2 expression: breathing problems. The children eating a more balanced ratio omega 6:3 ratio (~4:1) likely expressed less PGD2, and were thereby protected from asthma.

And if you wanted to take this a step further, you can even make efforts increase PGE2.

Remember that the best prostaglandin-related regrowth results so far have been achieved by decreasing PGD2 and increasing PGE2.

We already know that a diet that restricts omega 6 fatty acids may decrease PGD2 expression. But did you also know we can increase PGE2 expression naturally too?

Get into the sun as often as possible.

UVB radiation has been shown to upregulate PGE2 expression. All you need to do is start getting into the sun during peak hours of UVB exposure. In doing so, you’ll increase vitamin D and PGE2 expression – which may help tremendously in preventing hair loss (and even regrowing some hair).

Unfortunately, we haven’t heard much from the PGD2-inhibitor human trials. On top of that, hair loss forum trials with PGD2 blockers did little more than halt hair loss.

However, some hair loss experimenters are documenting regrowth by both blocking PGD2 and increasing PGE2 expression. The net – if we’re going to try a prostaglandin protocol and we want to maximize our chances for hair regrowth, we need to both decrease PGD2 and increase PGE2.

And there you have it. I’ll update this article as more news comes out. In the meantime, drop a question in the comments section!