Sulforaphane For Hair Loss – Does It Live Up To The Hype?

Sulforaphane is a molecule found in vegetables like broccoli. In recent years, it has been touted as a potential hair loss treatment. The logic is as follows: (1) in vitro studies suggest sulforaphane encourages the conversion of hair loss-promoting hormones – like DHT – into “hair-safe” hormones such as androstanediol; (2) in mouse models, sulforaphane improves hair growth outcomes, and (3) in humans, a 2021 study showed that sulforaphane (formulated as a conditioner) regrew hair. But is this evidence compelling enough to start investing in sulforaphane as a hair growth agent? And what don’t these studies tell us about this molecule? This article provides our take on the data. 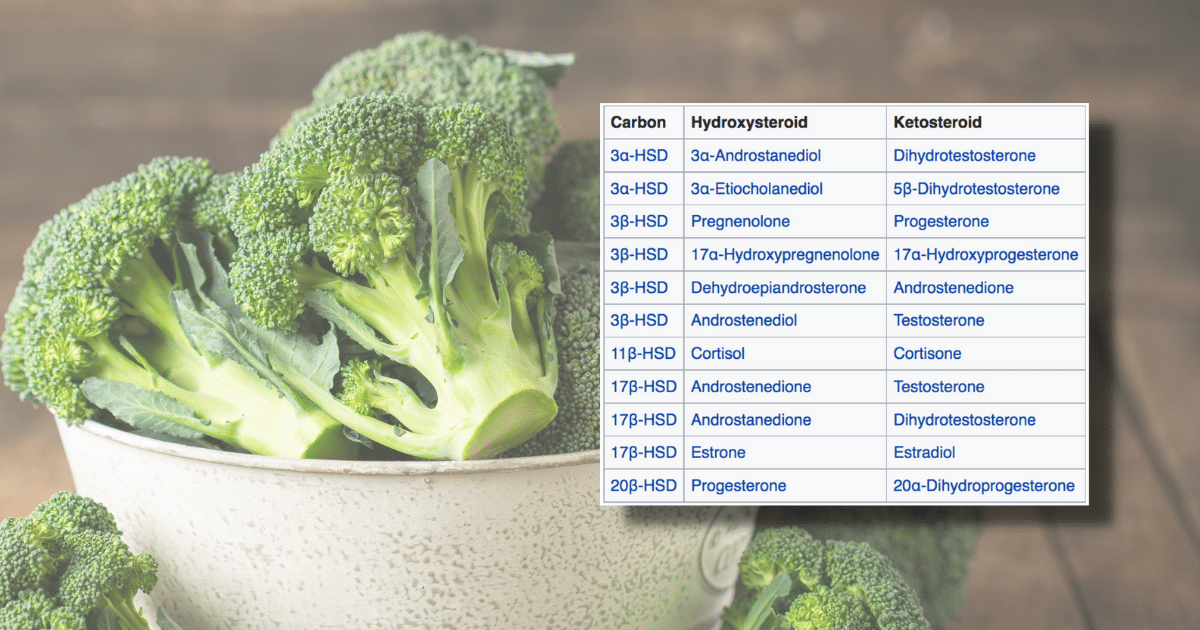 It hasn’t been long since Rhonda Patrick – a notable YouTube figure in the health and wellness space – brought to the limelight the molecule sulforaphane. This sulfur-rich molecule has garnered support in a variety of research topics like aging, anti-inflammation, and brain health.

It took less than a decade before people began investigating its potential for hair loss, and before self-experimenteés began trying it themselves for the potential hair regrowth mechanisms.

Before considering hopping on this trend, one must consider the current data as it relates to hair loss. Also, it’s important to determine whether or not certain anecdotes can convince us of its efficacy. And finally, we’ll take a look at where the research is heading in respect to sulforaphane.

Sulforaphane is a single molecule that comes from a family of molecules known as isothiocyanates. These compounds are actually some really unique compounds and very well known for their anti-carcinogenic potential.

They’re normally found in a lot of the vegetables and herbs that are a part of a standard diet.

But what exactly makes isothiocyanates, and then more specifically sulforaphane, so useful for such a large number of health-related disorders? It comes down mainly to its functional group. That is, the thing that gives it its potency.

The functional group of sulforaphane is the N=C=S bond. Basically, a nitrogen atom, a carbon atom, and a sulfur atom all hanging out with each other side by side. Funny enough, this is one step away from basically cyanide which is just carbon and nitrogen together.

It’s actually also precisely because it’s a little toxic like cyanide, that it actually activates a number of defense genes within our cells. And so as a response, things like antioxidants are produced in large amounts.

A little bit of a bad thing triggers a positive effect; this is otherwise known as hormesis.

How Is Sulforaphane Related To Health?

Because of this hormetic effect, we see sulforaphane doing a number of things within cells, not just boosting antioxidants.

Sulforaphane is known to…

Does It Help With Hair Growth?

Hype around sulforaphane began – in part – due to Rhonda Patrick’s mentioning of it on the Joe Rogan podcast. It wasn’t long before someone found a study relating to the use of sulforaphane in degrading dihydrotestosterone (DHT) – the causative hormone in respect to androgenic alopecia. Naturally, this caught our attention because it was one of the first compounds we had heard of being capable of breaking down DHT.

But sulforaphane doesn’t actually break down DHT. Instead, it signals for a hormone that uses DHT and converts it into its less androgenic form: androstanediol.

Essentially how it appeared to work based on some of the first mice studies were as follows:

With less DHT present and circulating within the bloodstream, the belief was that there is less of a chance of androgen-induced hair follicle miniaturization.

But that’s not at all…

It appears that sulforaphane may increase the ability of the entire set of hydroxysteroid dehydrogenase enzymes to function.

This is a big deal, as these are the enzymes that catalyze the conversion of hormones into more inactive states. It does this by providing the coenzyme that’s naturally needed for those enzymes to function at their best, NADPH.

Knowing this, what can be expected? A variety of hormone conversions, for one. For example, Wikipedia provides a simple table on the potential reaction by these enzymes on hormones: 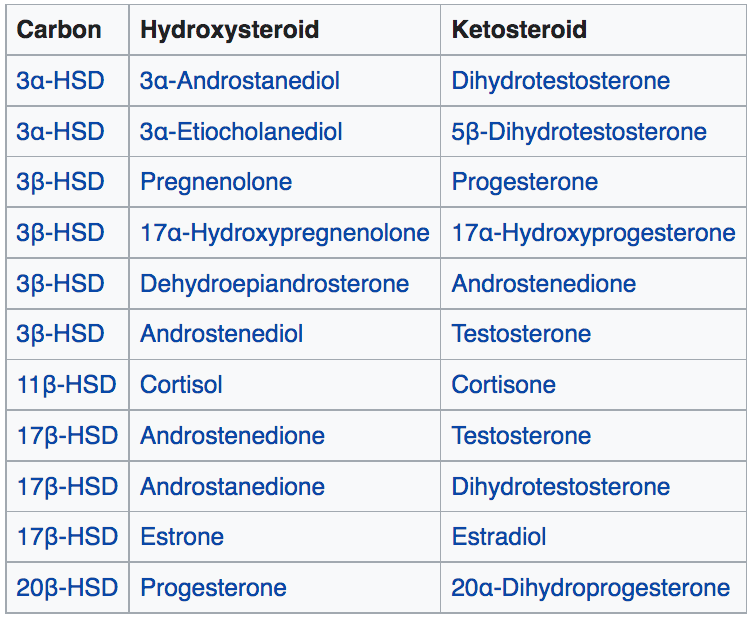 Now does this information translate in any meaningful way to hair loss? Let’s take a look.

What’s The Evidence Of Sulforaphane For Hair Loss?

One of the first studies analyzing the use of sulforaphane as a hair loss therapeutic was performed on mice.[2]https://pubmed.ncbi.nlm.nih.gov/26923074/ In general Sasaki et al. noticed a couple of things when utilizing 10mg/kg sulforaphane:

At a moderate dose of 10mg/kg too, this remained a relatively substantial finding. This is important, because when adjusting dosages from mice to humans, most people supplement with well over 300mg of sulforaphane and seem to tolerate it just fine. For these reasons, mouse models within that 10mg/kg dosing range may have an improved possibility of translating to human use.

In vitro studies done on sulforaphane also support the notion that it both reduces DHT levels and inhibits testosterone production in a dose-dependent manner.

Take, for examplem this graph from the following study that showed sulforaphane (E) at 1μg/ml (a ridiculously low dose), had the most prominent effect in reducing the effect of testosterone on cell growth.[3]https://onlinelibrary.wiley.com/doi/10.1111/jocd.14180

The researchers from the same study noticed that when given testosterone in a cell culture, hair growth from mice was inhibited. But when sulforaphane was added, hair growth was rescued in a dose-dependent manner, with more not being better in this case.

With higher NRF2 expression, the hair follicles quite literally reverse from almost catagen to anagen and are not shed. This prevents the miniaturization process and helps keep hair follicles around for longer.[4]https://pubmed.ncbi.nlm.nih.gov/27702566/

What About Human Studies?

It was only recently in 2021 that an actual study performed on humans with sulforaphane as a hair loss therapeutic was performed. In that paper, the authors used sulforaphane in a conditioner instead of an oral supplement or a topical.[5]https://www.mdpi.com/2079-9284/8/3/63/htm

After a critical evaluation of the study, it appears to be well-designed (despite having some problems). Let’s start with the positives.

First, the authors in this study made sure to leave no room for the potential of confounding factors affecting their results, or their samples affecting their results. For example, in all preliminary samples that they studied in vitro, they made sure that their confounding ingredients were not capable of growing hair itself, or causing damage to hair follicles. Researchers employ this by creating negative control groups to compare against treatment groups:

Second, when assessing the effect of sulforaphane, the authors confirmed, in a dose-dependent manner, that the more sulforaphane taken, the more the DHT degrading enzyme is produced (according to their preclinical tests).

In the hair loss product given to participants, they provided a list of all ingredients present and since they tested for the active ingredients involved (but not the carriers, surfactants, or thickeners; although naturally, they don’t have a hair growing effect), they knew all results, if effective, would be solely due to sulforaphane.

So, what did these researchers find?

After 18 weeks of using this product, participants experienced the following:

How to Interpret the Data

Science moves slowly; there are a lot of regulations, review boards, certifications, and agreements that need to be made before a study is even carried out. It’s only natural that less than six to seven studies exist at the moment in relation to sulforaphane and hair loss.

But based on the current evidence, it’s very possible that sulforaphane may lower DHT levels by activating the 3α-HSD enzyme in humans. How strong of an effect it has is yet to be determined. Based on the listed studies, it appears there is at least some effect.

The biggest problem with this latest study is the sulforaphane’s mode of delivery: via a conditioner. Conditioners are meant to coat the hair, not the scalp. Conditioners also have minimal contact time with our scalp skin – particularly versus oral and topical formulations. This dramatically reduces the opportunity for the ingredients inside the conditioner to break through the skin’s outer levels, enter the outer root sheath and dermal papillae cell clusters of hair follicles, and begin to have an effect. And then they’re washed off seconds-to-minutes after application.

The good thing about this mechanism of DHT inhibition is that unlike other DHT-lowering drugs. Sulforaphane (so far) does not appear to block neurosteroid synthesis, and it isn’t believed to target the 5αR enzyme. This suggests that it might be a great alternative for individuals who cannot tolerate FDA-approved hair loss drugs – provided that the research continues to bore out positively.

Because the only human study on sulforaphane utilized it in a conditioner product, instead of potentially and more effectively in a topical format, we cannot support its use for hair loss at the moment. And remember: the increase in hair counts was just +2 hair follicles per cm2. That would translate to essentially 1,000-2,000 more hair follicles overall on the scalp. That level of regrowth may sound big at-scale, but it is minuscule cosmetically and could also be attributed to seasonal changes in follicle counts.

Based On The Current Evidence

Based on the current evidence, it probably doesn’t hurt to incorporate sulforaphane or sulforaphane-rich foods into your diet for the general support it provides – from a health perspective and (possibly) from a hair perspective.

We know conditions like androgenic alopecia have some corollary to metabolic diseases like cardiovascular disease. Since sulforaphane has more research supporting its use in relation to those metabolic diseases, it is possible that a downstream benefit of sulforaphane on hair health comes from being generally more healthy.

You could also try moderate doses of sulforaphane and see if it had an effect on both your serum T and DHT levels by doing a before-and-after blood test. *But, as always, consult with your physician before doing anything.*

There is a strong possibility that if sulforaphane does work for hair regrowth, a more appropriate method would be a topical formulation. After scouting around a bit we couldn’t find any suppliers that provided topical sulforaphane. But as research develops, we’ll keep everyone posted (and update this article).

2 thoughts on “Sulforaphane For Hair Loss – Does It Live Up To The Hype?”