Stinging nettle is a popular natural remedy for hair loss. Unfortunately, quality studies on stinging nettle (and its effects on hair growth) are scarce. Most marketers selling stingle nettle relying almost exclusively on petri dish studies and mouse models to suggest it may have some hair-promoting effects. But historically, these studies rarely translate to humans – especially humans with hair loss. Nonetheless, we’ve worked with people who swear by stinging nettle (topically and orally) as a hair growth aid. There’s also evidence that this extract may exert powerful anti-inflammatory and antimicrobial properties, and possibly modulate hormonal profiles in men and women. In this article, we’ll investigate the science on stinging nettle and give our recommendations for whether its potential for hair regrowth is worth the cost of its investment. 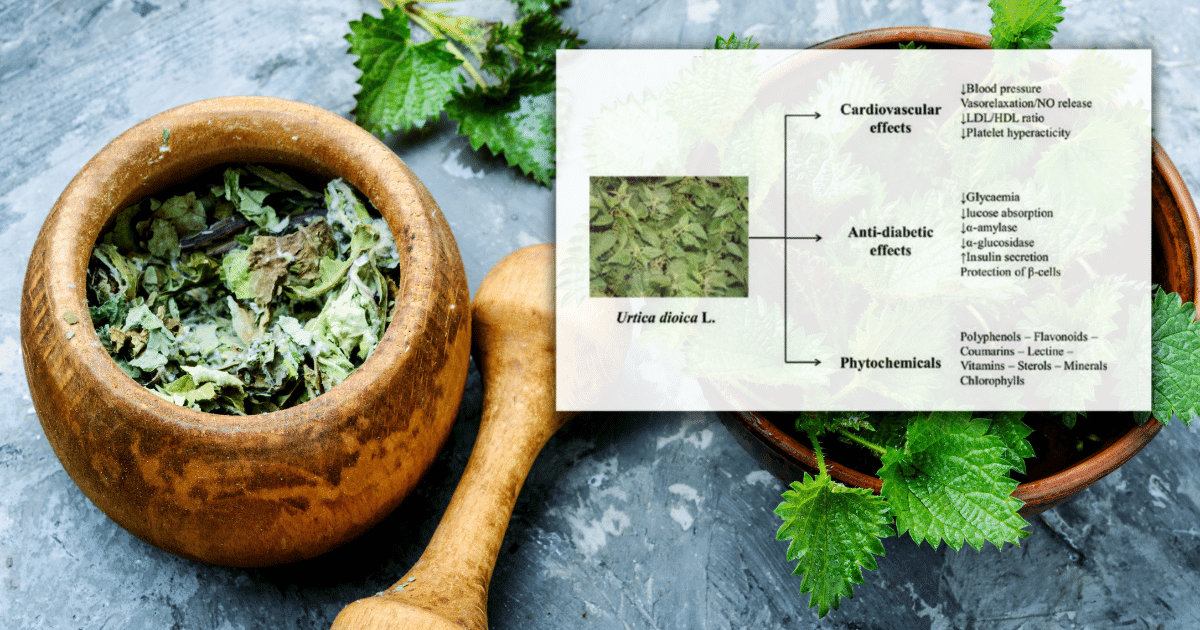 Stinging nettle is a type of flowering plant, generally regarded as a weed, that is regularly discussed within the hair loss space. This is because stinging nettle offers a variety of unique compounds that appear to modulate our hormones.

People consume stinging nettle either as the whole plant extract, or generally the key compounds it contains. Whether it be the gaelic acid or the zinc-protein complexes, people choose to utilize stinging nettle for a myriad of different compounds that directly act on our hormonal centers.

Modulating our hormones to a more favorable profile is not a new approach either. This is actually a very well established mechanism by which we can acquire some of the benefits associated with drugs like finasteride and spironolactone, for our hair.

But finasteride and spironolactone are very potent drugs that act specifically on certain sites like the 5AR enzyme or the androgen receptor. The data surrounding stinging nettle, its targets, and its effects, remains inconsistent.

People have argued that it can either help prevent hair loss or serve as a vehicle for worsening hair loss. Why? Well, hormone modulation is rarely ever one sided.

Some key questions relating to stinging nettle include:

These points, and more, will be addressed in this article.

Stinging nettle is certainly a special plant, as evidenced by its use in replenishing over-fertilized soil with key elements and minerals. Some of these minerals present in stinging nettle are in such large amounts that it quite literally blows away most multivitamins out of the market.

For example, in about 100g of stinging nettle, there is about 50mg of chlorophyll – the pigment molecule that gives plants their characteristic green color. Chlorophyll has been shown to be a useful anti-inflammatory for hair loss.

With that high chlorophyll concentration, you also get a load of key micronutrients needed for cells to function. Stinging nettle contains high amounts of the following micronutrients:

Additionally, it also contains a large amount of gallic acid, a molecule known for its uniquely beneficial effects on the cells of the hair microenvironment such as dermal papilla. Gallic acid is also usually part of many cosmetic drugs for its synergistic effects with azelaic acid, a well known hair loss compound.

The hormone modulatory effects of stinging nettle also come from the numerous phytochemicals it contains, such as:

This pharmacological gives some credence to the use of Stinging nettle for hormonal modulation.[2]https://pubmed.ncbi.nlm.nih.gov/31163183/ But what effect does this have on hair loss?

Why Do People Believe Stinging Nettle Can Help With Hair Loss?

Stinging nettle may have first garnered traction as a hair loss treatment when it was used in older studies on mice with prostate hyperplasia (a disease where the prostate gland enlarges, and primarily thought of being due to the influence of DHT). In these studies, stinging nettle showed a therapeutic effect.

Since stinging nettle by itself favorably reduces systemic DHT production without altering testosterone production. It has also been used in the bodybuilding world to reduce androgenic effects from hormones – such as hair loss from steroid use.

This is probably where the use of stinging nettle as a hair loss therapeutic for androgenic alopecia originated. However, that’s not all stinging nettle can do. Pharmacological evidence exists for its ability to reduce:

What About The Evidence On Humans and Hair Loss, Specifically?

After scouring the literature for any evidence of the use of stinging nettle in hair loss, via randomized controlled trials and reviews, no results came up.

Then, by expanding our range to include studies on the use of stinging nettle in vitro and ex vivo, still, no results were found.

Similarly, when further expanding to include mice and animal models of stinging nettle for hair loss, no experiment had been performed to date.

The Perfect Hair Health team then searched beyond the more reputed scientific journals that had investigated stinging nettle for hair loss. Here were our only findings:

These kinds of results are worthy of much further investigation. So why has it not been investigated until now?

First, they took qualitative values into account (like how they felt about their own hair after a couple of months) for this assessment. Which, by its nature, can drive unrealistic results. When we look at the quantitative value, we notice just a mild increase in hair count when compared to the placebo.

Nonetheless, this clinical trial deserved further study and replication. However, the confounding ingredients really make it tough to ascertain if the effects were solely from stinging nettle.

Aside from this one study, there exist patents for stinging nettle as a hair loss therapeutic, containing the following additional ingredients:

Unfortunately, the only additional piece of evidence we have for stinging nettle for alopecia is its potential use in scarring alopecia and alopecia areata.[8]https://patents.google.com/patent/WO2000056269A2/en

Their results showed about a 5x reduction in IL-1α signaling, reaching great significance.

Aside from these studies on hair related mechanisms and hair loss as a whole, stinging nettle has been investigated for its effects on:

Accessing the Data On Stinging Nettle

The wide-ranging data on stinging nettle makes it difficult to draw hard conclusions about its efficacy. With that said, stinging nettle may prove useful for general health, scalp health, and immune signaling.

Most notably, there is a lack of evidence on its use in isolation, or in combination, with other therapies to treat alopecia of any kind. Because no data exists, it would be a stretch to recommend stinging nettle for hair loss.

While it has shown effects on hormonal modulation, it can’t be assumed that stinging nettle lowers DHT and effectively treats androgenic alopecia.

Based On The Evidence 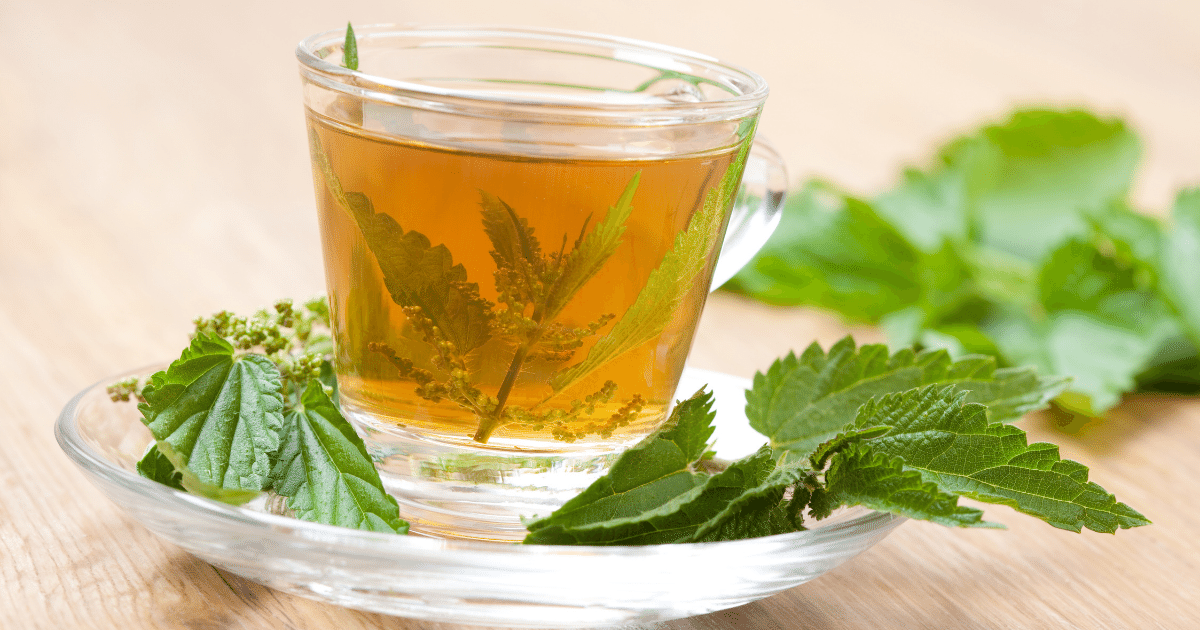 Should We Use Stinging Nettle?

When it comes to stinging nettle for general health, it can be a useful tool to have in the arsenal. It favorably modulates hormones and reduces blood sugar, which can affect our extracellular matrix and collagen. It has also been shown to prevent the rise of inflammatory molecules.

For Those Who Plan To Use It, What Is The Best Frequency and Dosage?

Most of the studies performed use stinging nettle extract. The extracts are made up of the roots, the leaves, or a whole-plant combination. The dosing ranged from as little as 200 mg to as high as 1000 mg, and typically not exceeding this amount.

Further, in vitro studies used a moderate percentage of around 10%.

Of the studies performed on humans, stinging nettle was used daily whether in conjunction with other herbs or medications.

We believe that oral supplementation may be the best for the general health benefits stinging nettle can provide. Topical formulations can produce some favorable effects on the scalp as well. Stinging nettle may also reduce complications present with seborrheic dermatitis and act as an antimicrobial with positive implications for androgenic alopecia.

There is a possibility that some people may actually be allergic to stinging nettle. It’s known as stinging nettle because the chemical released by its leaves can induce a rash or mild stinging sensation. Before using stinging nettle, try rubbing a bit of pure stinging nettle extract on your skin to see if you have any allergic reactions.

Watch this video to see how it can be done.

We’ll continue to update this article as research emerges.