Less than 10% of Americans are iodine deficient, and even fewer have a hair loss disorder caused by low iodine intake. Ironically, iodine is a trace element featured in many top-selling hair loss supplements, allegedly to help support the thyroid. This article separates fact versus fiction about iodine, its role in hair loss and hair growth, and why people with hypothyroidism (and hair loss) should think twice about supplementing.
Categories: Nutrition, Supplements

Iodine is a mineral featured in many top-selling hair loss supplements. The rationale for its inclusion? That iodine is an essential nutrient for thyroid function. And, since thyroid disorders are linked to hair loss, iodine must also be critical for hair growth.

There is some truth to this claim. At the same time, this truth is all context specific.

For instance, many people don’t know that iodine supplements are only appropriate for a small percentage of hair loss sufferers. Moreover, there are cases where iodine supplementation may actually cause hair loss.

To understand why, we’ll need to uncover:

This article unpacks the evidence, the answers, and more.

Iodine is an essential mineral found in fish, kelp, dairy products, and (in many countries) salt. It plays crucial roles in the maintenance of brain, thyroid, and metabolic health. It’s especially important for the growth and development of fetuses and children. 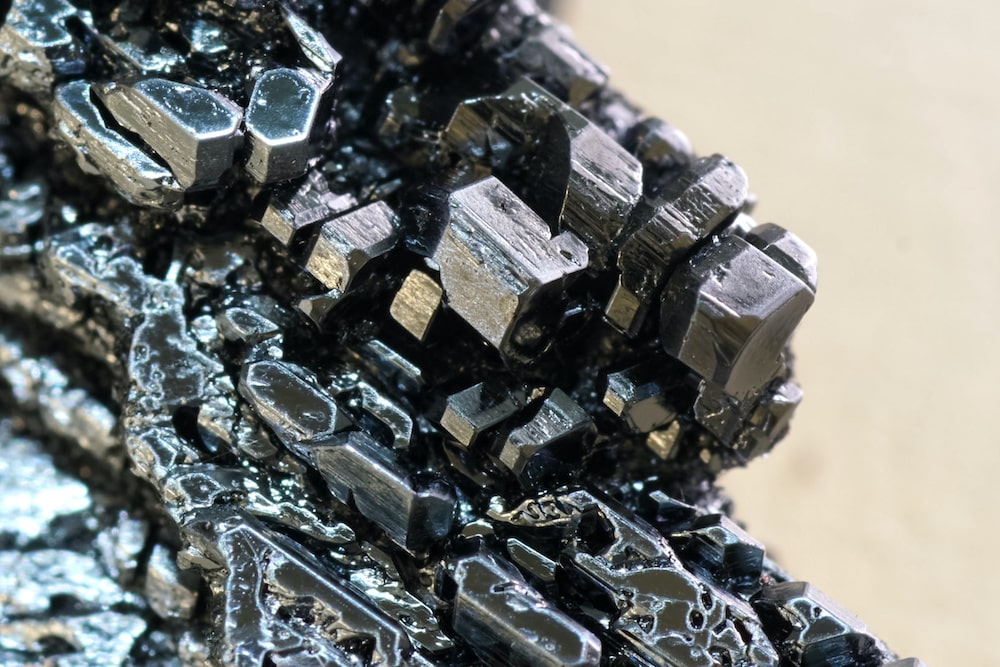 In 1990, almost one-third of the global population was affected by iodine deficiency, making it the single greatest preventable cause of brain damage. As such, salt iodization programs were initiated at the national level, leading to a drastic decline in the incidence of iodine deficiency. Today, only 8.8% of people in the U.S. are considered iodine deficient.

So, who are these individuals who are iodine deficient or at risk of a deficiency? And are these deficiencies linked to hair loss?

To answer these questions, we’ll first unpack the evidence on iodine and hair loss. Then, we’ll establish when iodine deficiencies are connected to hair loss (and when they aren’t).

Finally, we’ll reveal evidence for why people should think twice about taking iodine for hair health. After all, there’s evidence that iodine supplementation can hurt our thyroid, too… and maybe even our hair.

Is there any evidence that iodine plays a role in hair growth or hair loss?

Yes. Evidence from human and animal studies suggests that iodine deficiencies may contribute to hair health, and in a few ways:

So, iodine might affect hair growth… primarily due to its role in thyroid hormone production. To recap: without enough iodine, the thyroid can’t function properly, which can lead to hypothyroidism (an under-active thyroid). And when hypothyroidism is severe enough, hair loss can occur… specifically in the form of telogen effluvium and/or (maybe) female pattern hair loss.

So, can an iodine deficiency cause hair loss?

But just because iodine deficiencies may cause hair loss in certain scenarios does not mean you should supplement with iodine. Why? Because the scenarios we’ve outlined above are relatively uncommon… especially in the developed world. 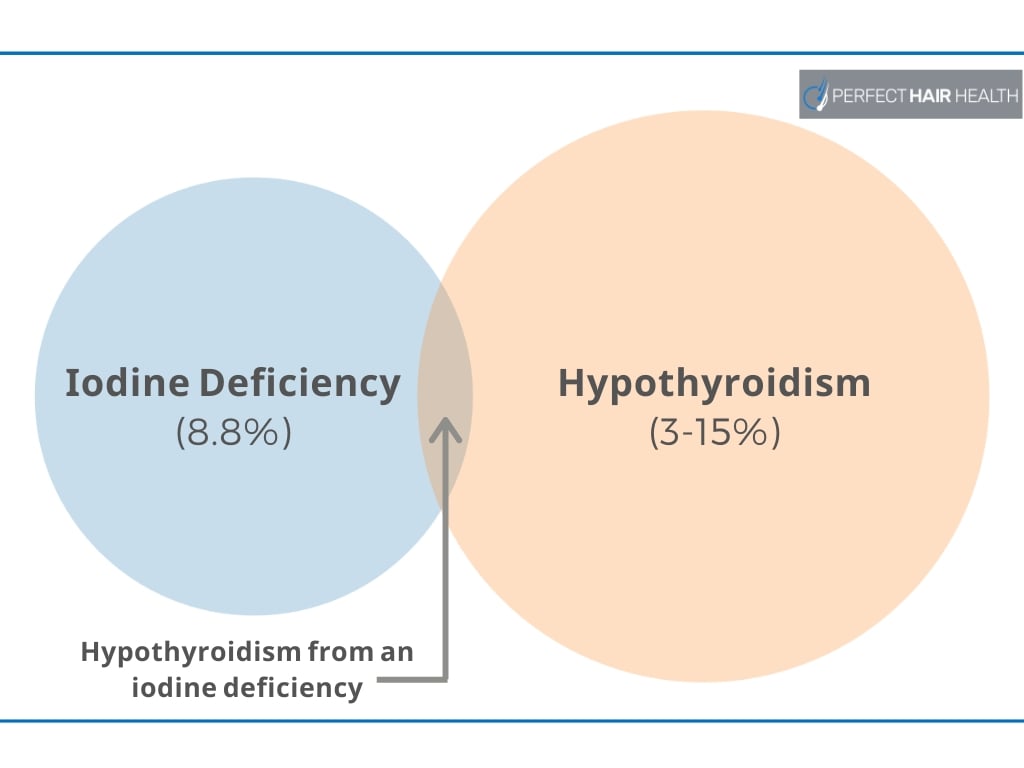 This means that iodine supplementation is unlikely to help the majority of hair loss sufferers in the developed world. In fact, there are even scenarios where supplementing with iodine might be dangerous, or maybe even cause hair loss.

Iodine helps the thyroid but, paradoxically, may induce hypothyroidism

Following the iodization of salts, the U.S. and other countries began to see a decrease in the prevalence of goiters – large growths on the neck which are often indicative of hypothyroidism. This, along with the evidence of decreased (preventable) brain damage all pointed to the fact that widespread iodization was working; it was preventing preventable diseases and making people healthier. Moreover, for most people, it seemed like the increased iodine consumption was generally well tolerated. These are all positives.

However, there’s always two sides to every story.

For instance, this meta-analysis of 50 studies revealed that yes, iodization (i.e., widespread iodine supplementation through salts) did decrease the number of goiters. But interestingly, chronic exposure of iodine also increased the incidence of hypothyroidism – mostly in places that were otherwise getting enough iodine to begin with.

This implies that iodine’s effects on thyroid health is biphasic. In other words, both low iodine and high iodine intake can lead to hypothyroidism. Therefore, we shouldn’t shoot to consume as much as possible; we should shoot to consume the optimal amount daily (more on this later).

Iodine helps the thyroid but, paradoxically, may induce hyperthyroidism

Hyperthyroidism is the opposite of hypothroidism; it’s when the thyroid is over-active. And interestingly, hyperthyroidism (like hypothyroidism) is also linked to hair loss, but through a different set of mechanisms.

Whereas hypothyroidism may evoke hair shedding as a result of “metabolic conservation”, hyperthyroidism exposes our hair follicles to too much thyroid hormone – which may deplete hair follicle stem cells (i.e., cells that are necessary for hair growth).

This phenomenon was first observed after the implementation of universal iodization programs. Researchers found that the incidence of hyperthyroidism began to increase in various countries. In some cases, these increases occurred directly alongside increases in salt iodization, suggesting a direct relationship.

Some evidence suggests that hyperthyroidism from excess iodine may also be due to too large of a jump in iodine intake, too quickly. In other words, it seems more prevalent in those jumping from extremely low iodine intake to extremely high iodine intake – which is really only possible through supplementation.

As such, it’s best to fully understand your iodine needs – and your own intake – before considering supplementing.

Any other health concerns with iodine supplementation?

Studies on populations in Iceland, Hawaii, and China have indicated that increased iodine intake may be a factor in some forms of thyroid cancer. At the same time, the body of research suggests yet another biphasic effect of iodine: low levels of iodine are also a risk factor for thyroid cancers.

So, it appears that both high and low intakes of iodine are implicated in cancer. Again, all roads lead to optimal iodine intake… not deficiencies or excesses.

How severe would an iodine deficiency need to be to cause hair loss?

For hypothyroidism to occur and thereby lead to telogen effluvium-related hair loss, one would have to consume less than 10-20 mcg of iodine per day. This is less than 15% of the recommended daily intake for adults.

Thus, most cases of hypothyroidism-induced hair loss are likely not attributed to iodine deficiency..

What might interfere with the thyroid’s ability to use iodine?

Beyond iodine consumption, there are some additional factors that can influence the thyroid’s ability to utilize iodine:

But, how likely is it that our fluoride and goitrogen exposure actually influences hypothyroidism?

In regards to fluoride, it only appears to be an issue in the case of moderate to severe iodine deficiency. So, again, the risk profiles here are all relative… and relatively small.

How can we safely maintain iodine levels?

A balanced diet with plenty of high-quality plant and animal foods is more than likely to provide all the iodine you need for sufficiency.

However, if you’re concerned that maybe your diet is slightly devoid of iodine, here are some foods you may consider adding to your diet:

Beyond that, avoiding iodine in your supplements is probably a good idea.

Iodine is readily accessible and abundant in foods – at least foods available in the developed world. Therefore, supplementation isn’t going to confer many benefits, as only 8.8% of people even have a gap to fill (which can be filled by changing your diet).

In light of this evidence, we’ve never understood why so many hair loss companies are hellbent on including iodine in their supplement line.

Aside from that, the evidence suggests that iodine is worth getting from food sources and iodized salt rather than a hair loss supplement. So, if you see a supplement with iodine, and you don’t have hypothyroid-related hair loss due to an iodine deficiency… maybe keep shopping.

Moreover, iodine excess is associated with both hyperthyroidism and thyroid cancer. For these reasons, iodine supplementation is not only unnecessary for most hair loss sufferers, but it’s also potentially dangerous.

The bottom line? Aim to get most of your iodine from food, and avoid supplements that contain iodine. If you’re concerned of a deficiency, consider increasing your seaweed intake, reducing your exposure to goitrogens, and filtering your drinking water to remove the fluoride. This will help to ensure your iodine levels remain in that narrow therapeutic window — the middle ground that promotes health and supports hair growth.

9 thoughts on “Iodine For Hair Loss? Think Twice About Supplementing”