Histamine and Hair Loss – Is There A Use For Antihistamines? 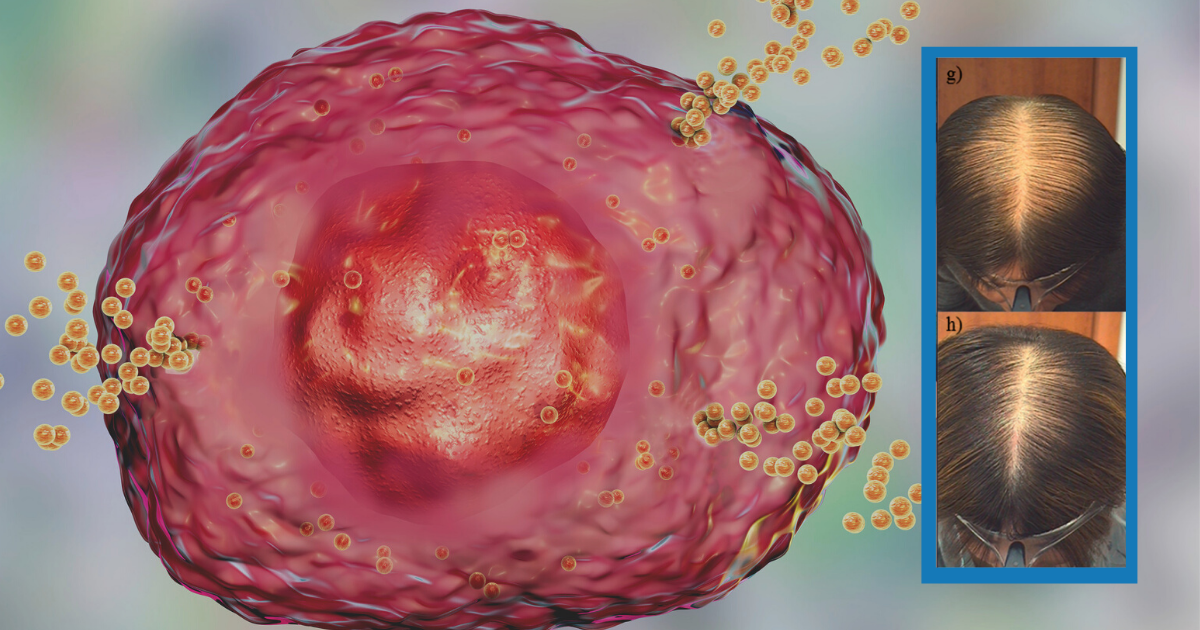 Our hair follicles are part of a niche of cells intimately involved in proper immune function. For example, right next to the dermal papilla, the type of cell that grows our hairs, there are a number of immune cells including:

Mast cells can become counterproductive though when too much histamine is secreted. They induce immunoglobulin secretion by our B-cells (those same cells that act as antibodies to viruses), such as the release of IgE – the same immunoglobulin that can create anaphylactic shock.

Histamine is also a pro-inflammatory cytokine (a signaling molecule), that can generate a number of unwanted cell responses that tend to progress hair loss.

In this article, we take a look to see just how much are mast cells and histamine to blame for hair loss, and what can be done about this. We also take a look at the evidence for the use of antihistamines as a hair loss reversal tool.

What Is The Role Of Histamine In Hair Loss?

Histamine is counterintuitively not a hormone, instead, it’s actually a simple amino acid. We get histamine thanks to consuming its precursor amino acid histidine. And it is vitally important for maintaining normal physiology.

Histamine also binds to four receptors. Some of which are located on our skin, some in our gastrointestinal system, and some in our brain. Histamine in the brain is also important for acting as a neurotransmitter.

It’s the excess of histamine signaling that becomes problematic.

A perfect example of excessive histamine signaling being bad is in the case of seasonal allergies, or food allergies. Anyone who has had experience will know how quickly and fiery the body responds to these allergens. This is all due to the release of histamine and how it interacts with those receptors.

This opening of our vascular system and leaking of immune cells in unwanted places is actually one way histamine connects to hair loss.

Because hair follicles and scalp act as a breeding ground for a variety of microorganisms, it is also very prone to exacerbated histamine signaling if the scalp biome balance is thrown off. Further, because histamine responds to changes in hormone levels, it’s very possible that the shift experienced with androgenic alopecia also increases histamine production.

Both androgenic alopecia and alopecia areata also show signs of dysregulated histamine signaling. Histamine in excess can induce pro-inflammatory cascades that cause premature apoptosis of cells, especially as it relates to the dermal papilla.

This rapid apoptosis can extend to cells (such as stem cells) sitting on our epidermis. Stem cells in the subcutaneous tissue and on the hair follicle’s outer root can bulge. Premature apoptosis of these cells makes it increasingly difficult to regrow hair since the stem cells which contribute to hair renewal are no longer present.

The Evidence For Histamine Contributing To Hair Loss

While the discussion on histamine specifically is rather sparse in relation to hair loss, there have been some advances in the past years on the role of histamine overall. For example …

Tryptase is an enzyme involved in the degradation of proteins, specifically by removing lysine, histidine, and arginine. Higher tryptase is also a hallmark of mast cell activation.

When the hair follicles experience a collapse of immune privilege, they also experience a dramatic increase in a variety of immunological factors. Specifically, a rise in lymphocytes like CD8+ T-cells, and IgE. Both of which are either triggers/ secrete (T-cells) histamine or can be triggered by histamine release from mast cells.

Specifically, the deep perivascular and perifollicular regions of those with alopecia areata, when compared to controls, had higher CD4+ T cell count, and CD8+ T cell count. They also had more mast cells.

These findings reached multiple orders of magnitude in terms of significance. Interestingly, this was not really something of concern when it came to the upper dermal region. Indicating that unless we look further down the dermis, we are unlikely to see any noticeable changes in immune profiles.

This can lead to the overproduction of elastin, leading to a feeling of hard tissue often referred to as fibrosis of the scalp. In another case-control study, the increase in collagen fibers, elastin, and the lower diameter of hair follicles, was apparently clear in those with androgenic alopecia.[2]https://pubmed.ncbi.nlm.nih.gov/18286292/

Figure (a) and the graph to the right of it are indicating the increase of collagen bundles in the occiput and vertex of either controls or those with AGA. While the occiput didn’t differ much, the vertex was clearly different.

Figure (b) is indicating the increase in elastin seen in those with androgenic alopecia as compared to control.

And when it came to mast cells, those with androgenic alopecia also had a higher level of the enzyme tryptase (again indicative of mast cell activation). Interestingly, tryptase is also a well known factor involved in the activation of TGF-ß and collagen remodeling, potentially pointing to a role of mast cells in the fibrosis of those with AGA.

It’s important to keep in mind that these findings were for a total of 10 patients and 5 controls. A greater sample size range is required to definitively tell if this is either a correlation or a fluke.

Interestingly, the increase in TGF-ß signaling appears to be contradictory when it comes to alopecia areata. In androgenic alopecia it’s implicated as a fibrosis-inducing agent, while in alopecia areata, the loss of TGF-ß is a precursor step to loss of immune privilege.

This change in activity of TGF-ß is known to be induced by a shift in mast cells from an immune-inhibitory role to a pro-inflammatory role.[3]https://pubmed.ncbi.nlm.nih.gov/24832234/

One research group had actually investigated this separately with a mice model and determined with incredible accuracy that one of the reasons for the differential response of mast cells as either good or bad, is partly due to the scalp microbiome and dermal fibroblasts.[4]https://pubmed.ncbi.nlm.nih.gov/30928651/

The mice study showed that the scalp microbiome activates toll-like receptors (a type of immune recognition receptor) and amplifies progenitor cells from the keratinocyte to become mast cells. Further, a change in how the mast cells behaved was seen. One of immune inhibition into one of pro-inflammation and immune cell recruitment.

Do Antihistamines Work Against Hair Loss?

The next step in assessing the role of mast cells in hair loss is to consider if anyone has looked at the use of antihistamines for hair loss. After all, while mechanistic and observational data connecting histamines to hair loss are important, interventional studies are really the only way to ascertain cause and effect.

Luckily, there are some research papers that addressed this question.

The first study investigated the antihistamine drug cetirizine (if you’ve ever tried claritin or zyrtec, this is the same active ingredient), because of its known inhibitory actions on histamine-1 receptors and PGD2 (a proinflammatory prostaglandin shown to worsen androgenic alopecia).[5]https://onlinelibrary.wiley.com/doi/abs/10.1111/jocd.13940

What the authors did was give 30 participants a 1% solution of topical cetirizine at 1mL doses. The second group which served as a control group was given a placebo solution. After six months these were the results:

In a second study, researchers compared 1% cetirizine vs. 5% minoxidil. In this randomized controlled trial, both groups saw great results in terms of hair density, hair diameter and other hair loss parameters. Minoxidil however, outperformed topical cetirizine.[6]https://journals.library.ualberta.ca/jpps/index.php/JPPS/article/view/31456/21623

This is expected since minoxidil works by promoting the anagen phase of hair follicles. Cetirizine simply works by blocking the uptake of histamine in the histamine-1 receptor. This is fascinating to note though as by simply blocking the cellular actions of histamine, cetirizine has comparability to minoxidil.

Their outcomes showed some of the following features:

Nonetheless, a combined therapy may be even more potent at addressing hair loss…

In the final study on cetirizine, patients were once again administering 1mL of a 1% solution of cetirizine topically. After six months, a dramatic improvement in hair regrowth was seen for the participants when compared to the control group.[7]https://pubmed.ncbi.nlm.nih.gov/28604133/

What’s Our Take On The Data?

There is a clear rationale for the induction of mast cells in the pathology of possibly all forms of hair loss, including a connection to immune defects like telogen effluvium. Mast cells play a critical role in feedback from the scalp microbiome to our scalp cell niche.

When mast cells go awry, they release histamine, tryptase, and a number of other factors that cause extracellular matrix remodeling, recruitment of immune cells, and a vicious cycle progressively worsening with time.

Addressing the excess histamine production by interfering with the histamine-1 receptor with cetirizine, abrogates most of the negatively associated responses and actually does seem to allow regeneration of hair follicles.

Based On The Evidence

The use of topical cetirizine can be a very appropriate tool to implement with androgenic alopecia and alopecia areata. The rise of mast cells and the enzyme tryptase in patients with telogen effluvium as compared to controls also provides a very compelling argument as to how stress correlates with hair shedding disorders.

It is with the totality of the current evidence, prior knowledge on the mechanisms of mast cells and their roles in our bodies, as well as the efficacy of antihistamines in improving hair loss, that we believe the weight of the evidence largely supports a causal role of mast cells in the development of various forms of hair loss.

What Then Should Be Done?

Since topical cetirizine consistently shows a net benefit in all the current clinical trials, the most logical addition should be topical cetirizine for any hair loss disorder. It may be that in conjunction with minoxidil, large improvements can be acquired.

Further, with topical anti-inflammatories, cetirizine can dramatically reduce the apoptosis rate of precious stem cells surrounding our hair follicles. There are alternatives to cetirizine that operate in similar mechanisms, reducing histamine release and subsequent binding to histamine-1 receptors.

Some of the useful ingredients that can reduce histamine production and the effects of histamine include:

And many more. A majority of the micronutrients and vitamins are also key cofactors for proper function of the enzymes involved in histamine degradation – such as Diamine oxidase and Histamine-N-Methyl Transferase enzymes.

Although we can’t generally acquire topical cetirizine, one can be made by dissolving 1 g in 100mL of water. Forming 1% w/v cetirizine, just as outlined in the studies. The only difference would be that the study used a form of alcohol instead of water.

A simple formulation you can make at home includes:

*Note: If you plan on using oral antihistamines, remember that they distribute widely throughout the body, not just the skin. The compounds prevent histamine from binding to the brain which is one of the reasons for the drowsy feeling many experience with Zyrtec or Claritin.

2 thoughts on “Histamine and Hair Loss – Is There A Use For Antihistamines?”