The 6 Best DHT Blockers For Men 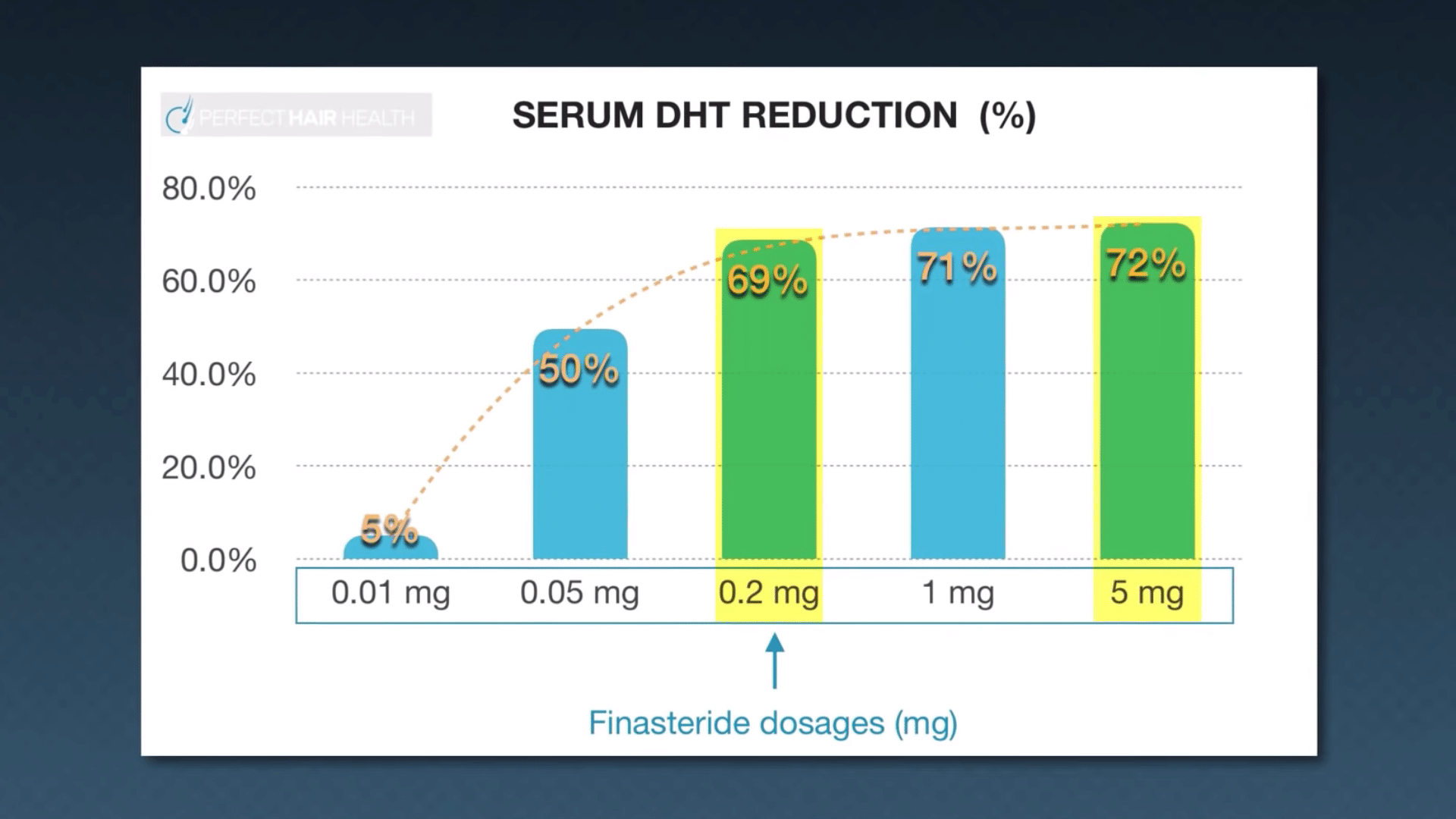 After performing a quick Google search on the topic of DHT blockers, one might navigate to this Healthline article. The piece mentions dietary solutions like coconut oil, onions, turmeric, pumpkin seeds, and edamame.

There are also mentions of pharmaceuticals: finasteride, spironolactone, fluridil, ketoconazole, and dutasteride.

It’s time to navigate to the facts, not fiction, about DHT blockers. And determine which ones work and which ones don’t. This article outlines 6 DHT blockers, ranked from worst to best.

But first, what is DHT?

DHT is short for dihydrotestosterone, which is a hormone made from testosterone. It’s also the main hormone implicated in pattern hair loss, one of the world’s most common hair loss disorders.

This article is not going to dive into the nuances of the DHT-pattern hair loss connection. That’s for a later article.

For now, readers should note that studies have determined:

Needless to say, if men want to fight pattern hair loss, they should consider lowering DHT. But herein lies the problem: DHT isn’t just a hormone linked to hair loss; it’s also a hormone that is critical for male development.

Moreover, in adulthood, DHT seems to be protective against high estrogen levels. As such, men who lower their DHT levels will sometimes report side effects, including weak erections, brain fog, and even gynecomastia – the growth of male breast tissue.

That’s why, when picking a DHT blocker, one must weigh power against safety. In other words, for any DHT reducer, hair density tends to increase in tandem with a heightened risk of side effects. 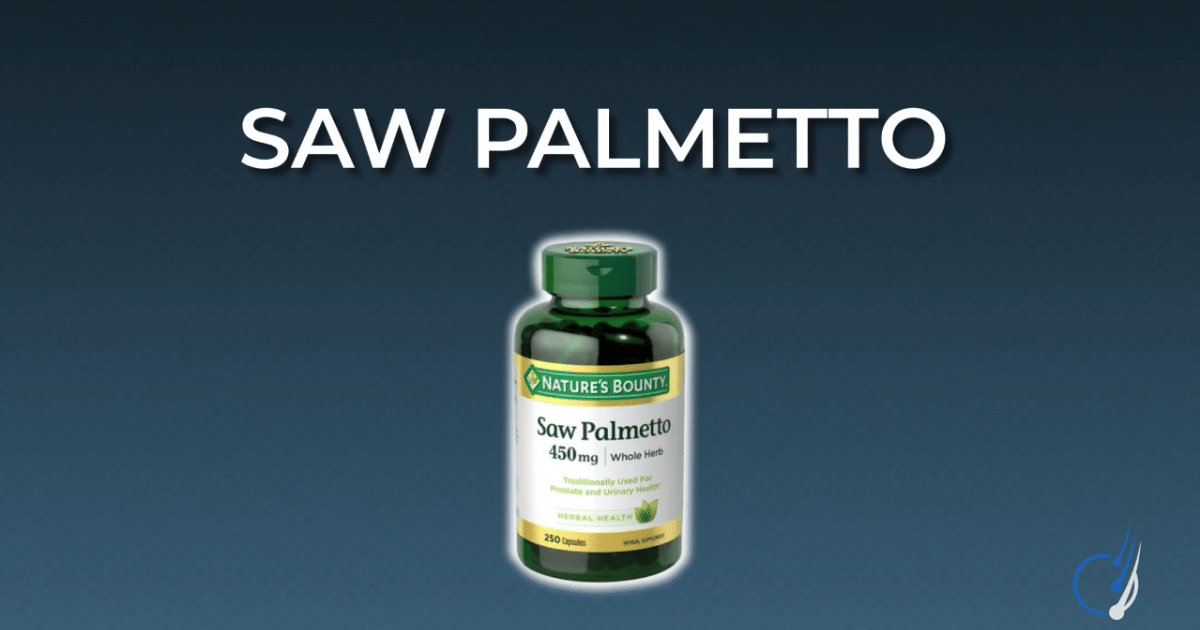 Saw palmetto, a palm plant grown in the Southeastern U.S. is one of the most popular herbal DHT reducers, and not without reason. In one clinical study lasting two years, saw palmetto was shown to stop pattern hair loss in 90% of men taking the supplement.[5]https://journals.sagepub.com/doi/pdf/10.1177/039463201202500435 Other studies have shown a bit of regrowth when combining saw palmetto as a supplement and a topical.[6]https://www.karger.com/Article/FullText/509905

Based on Perfect Hair Health member results, saw palmetto, by itself, isn’t really that effective as a standalone treatment. But it’s better than nothing, and overall, studies show that the supplement is relatively safe – even over five-year time horizons.

For example, a meta-analysis examined 14 randomized, placebo-controlled studies that had reported adverse events, and found that saw palmetto’s risk of side effects was small, comparable to placebo groups.  When events did occur, they were mainly upset stomachs or headaches experienced after taking the supplement on an empty stomach.[7]https://link.springer.com/article/10.2165%2F00002018-200932080-00003 Better yet, another study saw no concerning changes to bloodwork… with the majority of side effects reported in the placebo group – or in other words, people who weren’t even taking saw palmetto.[8]https://www.ncbi.nlm.nih.gov/pmc/articles/PMC2518869/ Lastly, out of thousands of participants taking saw palmetto, only a small handful have ever reported reductions in libido. This suggests that the risk of sexual side effects is much less than 1%.

Taken together, this puts saw palmetto first on our list of DHT reducers for men. It has relatively low efficacy, but a high safety profile – and it still does something. In other words, it appears very safe and might help to slow down or stop pattern hair loss. But don’t expect any miracles.

Keep the following tips in mind when taking saw palmetto:

These recommendations just scratch the surface, especially in terms of which saw palmetto brands to avoid. But that’s for a later article. 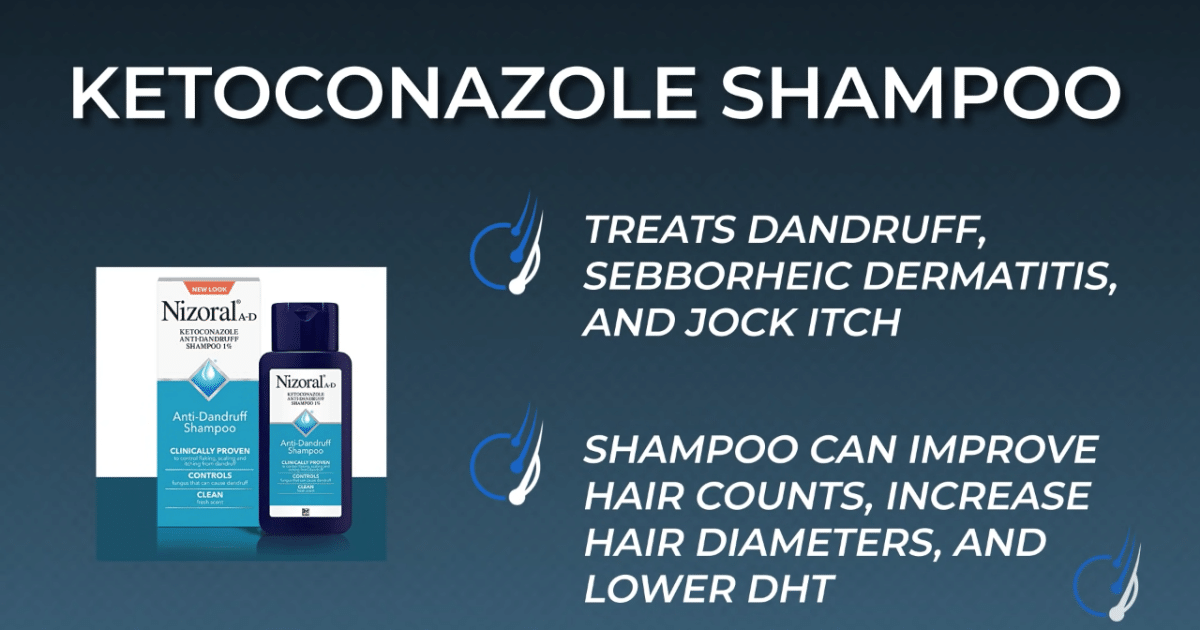 Ketoconazole is an anti-fungal medication. It’s used to treat skin conditions like dandruff, seborrheic dermatitis, and even jock itch. When formulated as a shampoo, there’s some evidence that it can improve hair counts, increase hair diameters, and potentially even lower scalp DHT levels in men – all without impacting hormone levels elsewhere in the body.

In fact, studies show that 2% ketoconazole, when used properly, boasts an 80% response rate with an average hair density increase of around 5%. Again, that’s no miracle, but with just 1-7% of people reporting side effects ranging from scalp itchiness to scalp dryness, ketoconazole can be considered a low cost, low effort, and moderately effective hair loss intervention. 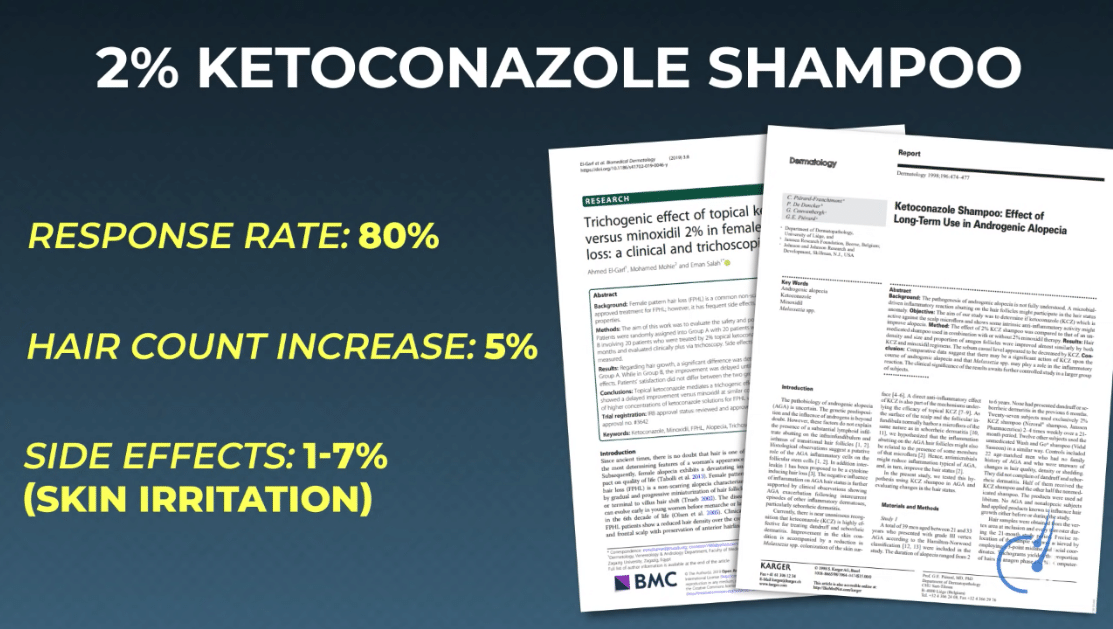 Two quick notes for those who want to try ketoconazole: 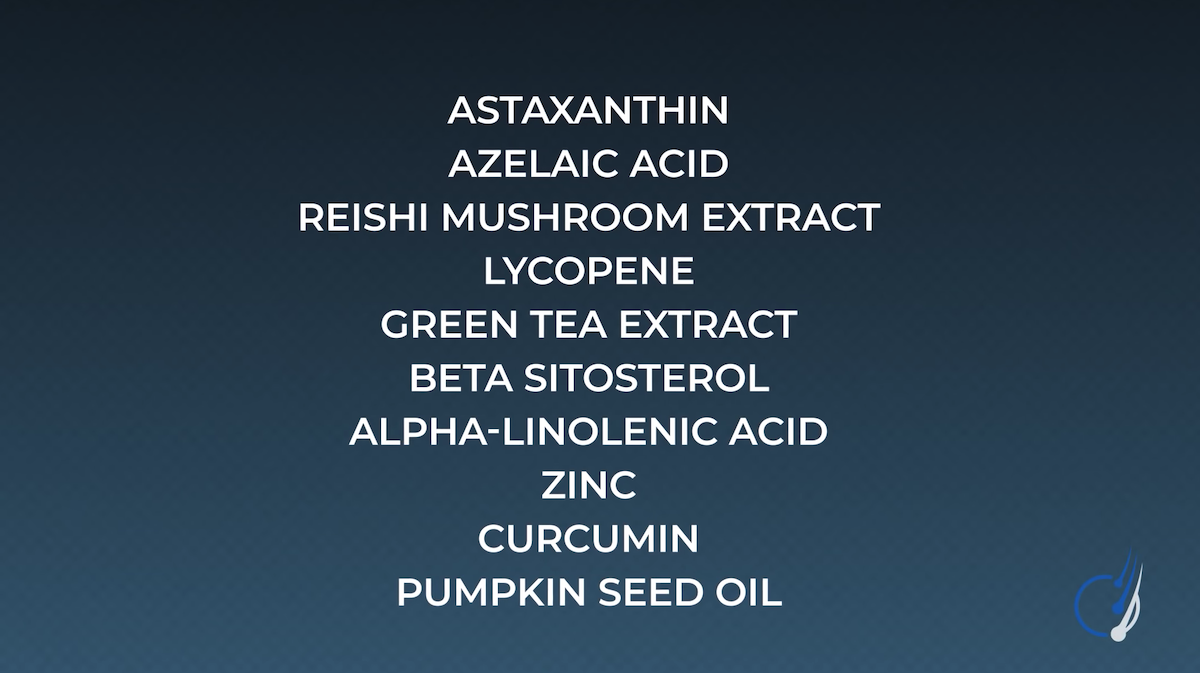 Saw palmetto isn’t the only natural DHT reducer out there. There are studies showing that in cell cultures, other substances and herbal extracts can inhibit 5-alpha reductase, the enzyme that converts free testosterone into DHT, and in doing so, potentially lower DHT in humans.

If we combine these all together, can we reduce more DHT than saw palmetto alone and see increased hair growth?

The logic is understandable. However, in biology, taking more of something doesn’t always equate to greater improvements – especially when taking things that all target the same pathway for DHT reduction: 5 alpha-reductase.

For instance, in one study, taking 3x the daily dose of saw palmetto for one year did not lead to 3x better improvements to an enlarged prostate; It led to the same improvements as a standard 320 mg dose.[9]https://www.ncbi.nlm.nih.gov/pmc/articles/PMC3326341/

Similarly, another study showed that mega-dosing saw palmetto and astaxanthin did not reduce blood levels of DHT any better than a small amount of saw palmetto and astaxanthin.[10]https://jissn.biomedcentral.com/articles/10.1186/s12970-014-0043-x And with this information in mind, when looking at clinical data on supplements like Nutrafol – which combines many natural potential DHT reducers into one pill – the hair regrowth isn’t really any more impressive than what we expect from a typical dose of saw palmetto alone.

Which begs the question: why mention the combination herbal extracts above both saw palmetto and ketoconazole?

There’s not a good answer.

All three of these options are similar in efficacy. But for these herbal combinations, where they differ probably isn’t efficacy; it’s safety.

There are very few long-term studies evaluating the safety profiles of herbal extracts for blocking DHT, particularly at the mega-dosages featured in best-selling DHT blockers on Amazon.

Adding in all these extra natural DHT-reducing herbs might have some effect, but one must be very selective in going about it. And those diminutive hair gains might not be worth the massively higher costs or the safety risks versus just taking saw palmetto alone.

Now on to pharmaceutical territory. 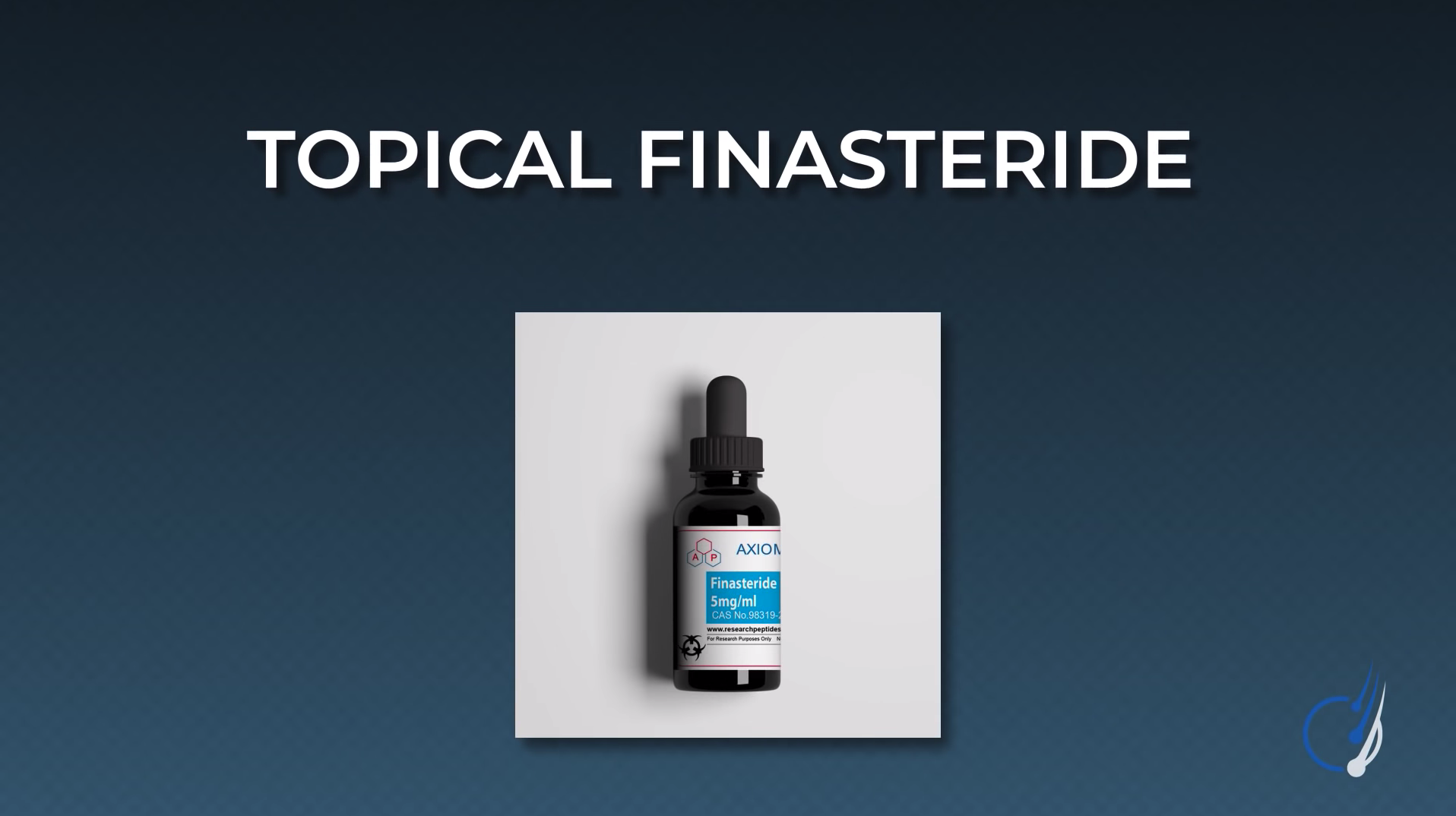 For men, finasteride is considered the gold standard treatment for pattern hair loss. Studies show that it can stop pattern hair loss in 80-90% of men, increase hair counts by 10%, and thicken miniaturizing hair – which all in, often equates to 20-30% improvements in hair density.[11]https://www.sciencedirect.com/science/article/pii/S0022202X15529357 The drug does this by inhibiting an enzyme called type II 5 alpha-reductase, thereby lowering DHT levels by 60-70%.

The problem is that oral finasteride reduces DHT everywhere, and not just on the scalp. In other words, it’s a systemic DHT reducer. And it’s this systemic lowering of DHT that some people use as a surrogate to predict a risk of side effects.

So people often ask: what if we could just localize finasteride’s effects to only the scalp? Well, that’s what topical finasteride attempts to do. It formulates oral finasteride as a topical –  the medication can be applied directly to the scalp and, hopefully, reduce its risks of going systemic.

So, does this actually work?

Yes, to a degree.

Studies suggest that topical finasteride, at a 1% formulation, is “non-inferior” (or equivalent) to 1mg oral finasteride tablets in terms of hair regrowth.[12]https://pubmed.ncbi.nlm.nih.gov/19172031/ But concentrations as low as 0.005% have been shown to improve hair growth in men with pattern hair loss.[13]https://www.tandfonline.com/doi/abs/10.3109/09546639709160517 So, what about the systemic absorption part? Well, this is where things get complicated…

There are studies showing that topical finasteride at a 0.25% dilution can reduce scalp DHT by 24-75%, depending on the amount applied. And while larger applications reduce more scalp DHT, they also appear to have systemic effects on DHT. [14]https://pubmed.ncbi.nlm.nih.gov/25074865/ 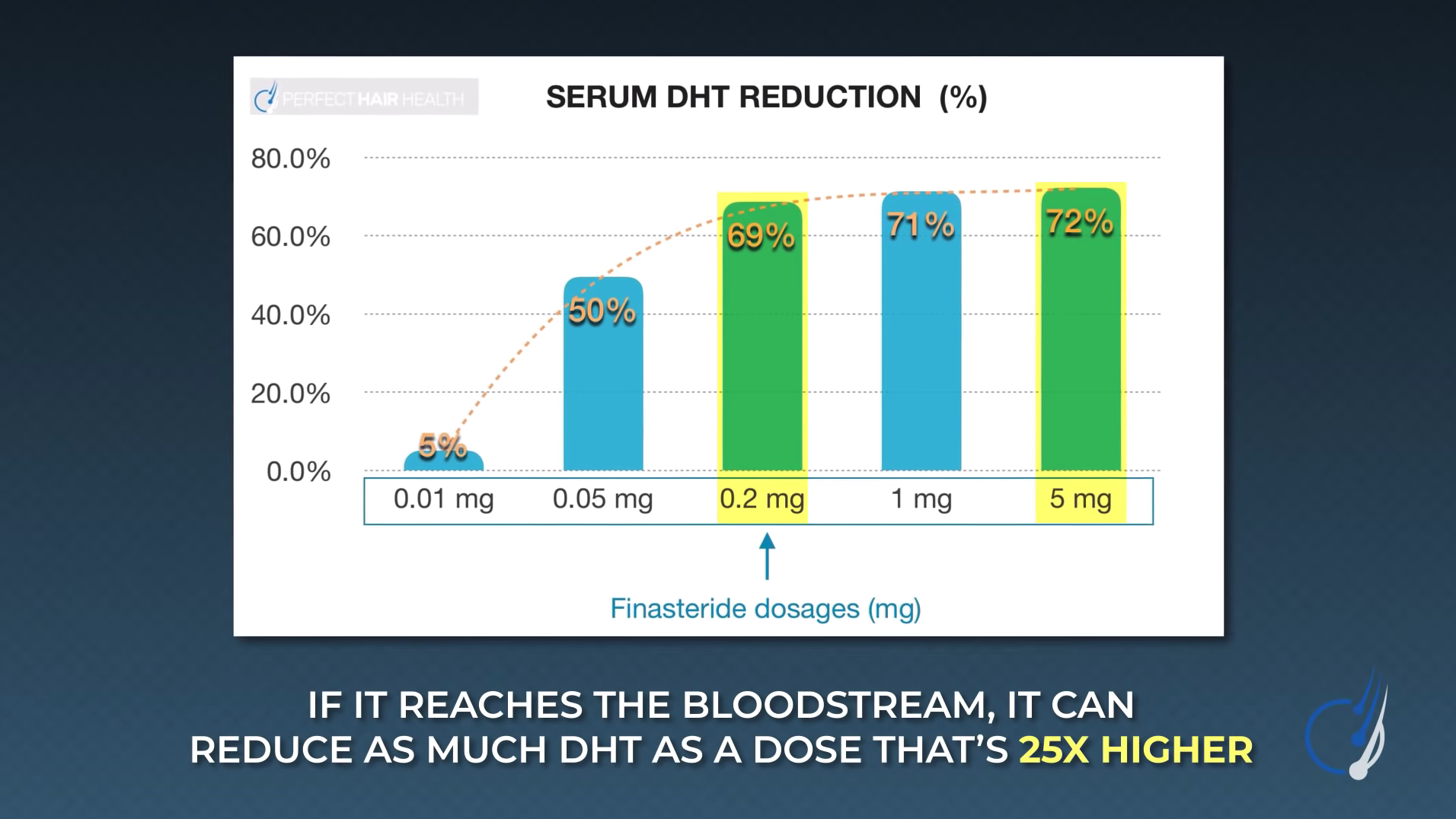 This is because finasteride has a dose-dependent logarithmic effect on DHT reduction. In other words, if just a tiny amount of the drug reaches the bloodstream, it can reduce just as much DHT as a dose that is 25 times higher.

That’s 2.5-fold more finasteride exposure than a daily 1mg oral dose. And again, just 0.2mg of that dose needs to enter the bloodstream to produce the same DHT-reducing effects everywhere as the oral medication.

Compared to topical finasteride, oral finasteride confers unique advantages: it’s easier to use, it affects all hair follicles rather than just the follicles where the topical is applied, and it’s supported by better clinical data. Across hundreds of studies and tens of thousands of participants, finasteride has demonstrated consistently impressive hair growth outcomes and a decent safety profile.

Better yet, the drug seems much more effective than its herbal alternatives. In one head-to-head study, it demonstrated significantly better hair growth outcomes over two years with finasteride versus saw palmetto. [15]https://pubmed.ncbi.nlm.nih.gov/23298508/ It’s this data that firmly cements finasteride as one of the more powerful DHT reducers on our list. 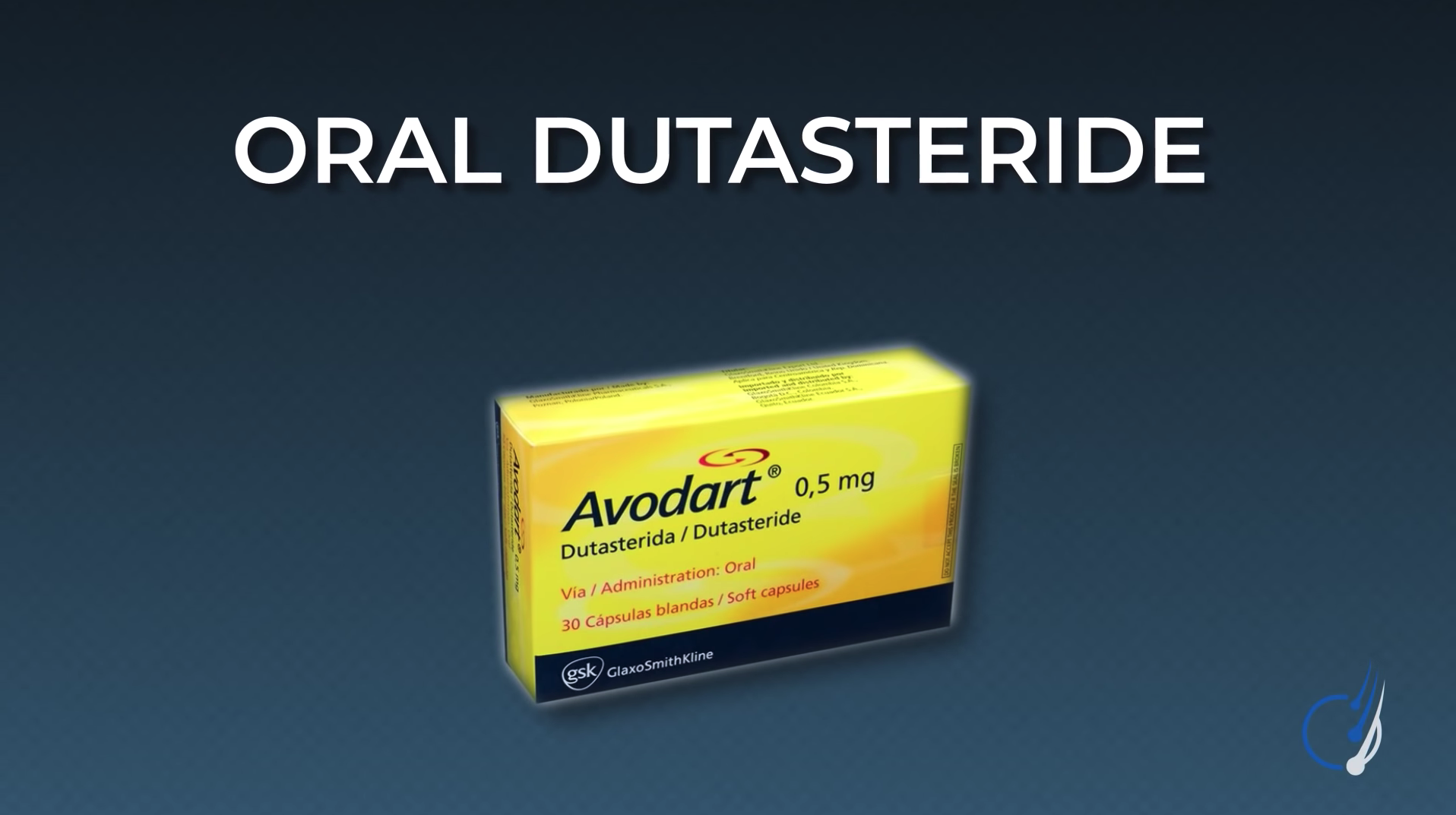 Those looking for an even greater DHT-reducing effect may want to consider oral dutasteride. This medication is an inhibitor of type I and type II 5-alpha reductase and it’s prescribed off-label for those looking to treat pattern hair loss at the highest level.

Depending on the dose, dutasteride can reduce DHT levels by up to 95%. This makes it significantly more powerful than finasteride, with short-term studies showing that 0.5 to 2.5 mg of dutasteride regrows hair 2-5 times faster than finasteride, and even leads to more robust increases in hair counts.

Interestingly, this meta-analysis showed that when used as a hair loss treatment, dutasteride’s risk of side effects was actually comparable to finasteride, despite lowering more DHT.[16]https://www.dovepress.com/getfile.php?fileID=48173 However, the risk of certain side effects – like gynecomastia – increases with dutasteride versus finasteride.

So, while it’s likely more effective, it also may come with a slightly higher risk of side effects.

Before concluding, there are a few more things worth mentioning.

First, the only scientifically honest way to compare effectiveness and side effect profiles across DHT reducers is to test them within the same study. This is because patient populations, hair counting methodologies, and side effect questionnaires all vary across hair loss studies. That makes crude comparisons across two random studies really hard to do.

Since a single study comparing all of these DHT reducers does not yet exist, we can’t claim that this analysis is perfect.

Second, it’s important to keep in mind that in the absolutes, every DHT mentioned here is relatively safe. Finasteride and dutasteride are taken by millions of men every day – most of whom report no issues.

Hair loss sufferers shouldn’t let these relative comparisons scare them away from trying these pharmaceuticals. If someone cannot tolerate a drug, they can always hop off and try something else.

Third, a few DHT reducers were left out: topical dutasteride, RU58841, procapil, and others. This was intentional: these treatments rely too much on experimental data and unpublished clinical trials to accurately gauge efficacy and safety profiles.

These topics will be covered, at length, in future articles.